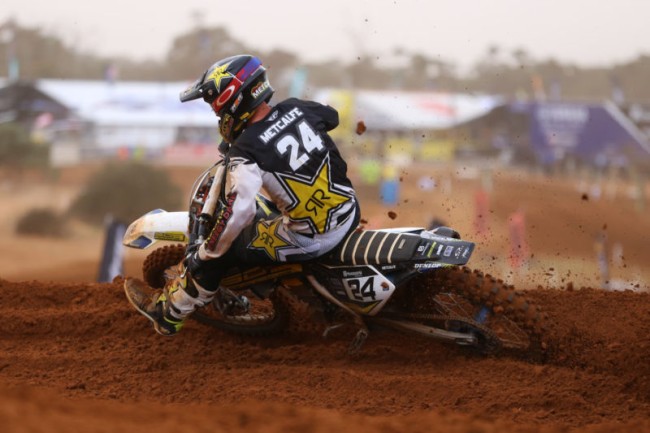 It might not be the biggest or most heavily backed team getting around, but the SD3 Husqvarna team continues to punch well above its weight, announcing the signing of international star Brett Metcalfe as its full-time premier class rider for season 2017.
The 32-year-old, originally from Mannum in South Australia, will ride the Australian MX Nationals championship in its entirety, before taking on the Australian Supercross Championships at the end of the year.

In a glittering international career that has lasted almost 15 years, Metcalfe became AMA motocross Vice Champion in 2010, Southwick National winner in 2011, and was a member of the Australia motocross of Nations team which finished on the podium in 2011.
Metcalfe rode a four-race stint for the SD3 team at the beginning of last year’s MX Nationals, and with the ink still drying on his contract and virtually no test time, still gave the brand its first real premier class contender since the 1970s.

Riding a very standard Husqvarna FC 450 against the thoroughly developed factory bikes of the opposition, the decorated international still scored podium finishes in two of the four rounds, and gave Husqvarna a race victory in the third round of the championship at Appin, before departing to compete in the Canadian Motocross Nationals.
Metcalfe will complete an impressive three-pronged Husqvarna assault on the MX Nationals, when he reunites with MX2 contender Luke Arbon and MXD racer Kaleb Barham.
For more information on Husqvarna motorcycles visit www.husqvarna-motorcycles.com

Brett Metcalfe: “The decision was fairly simple for me and my family. I’d done some brief stints in 2015 and 2016 with the SD3 team and we have a successful working relationship established with good sponsors. Our 2016 run was in some ways a trial run, and we learnt what a standard Husqvarna FC450 is capable of; we won races and had podiums. I know we have a product that can win, a team and company of people committed to work and most importantly, we want to make it fun and creative for the team. I wanted to be a part of this!
A huge factor is bringing my family down for the season to experience the lifestyle Australia can offer. It will be nice for the kids to visit new places and make new friends and memories. We have a unique team with Owner Steve and Dimity McKinnon having 4 kids, myself with 2 kids and now Luke and Kirra adding to the clan with a baby expected in March. So the lifestyle for us revolves around family and racing. It just fits right now.
Last year the competition was intense. You need to go back many years to find that depth and talent. It was how Aussie MX needs to be! 2017 will be no different. I expect the same players plus a few new entries to run up front. I may be the oldest in the field now, but I embrace that. I want to win more than ever and I believe in myself and my team.
Luke is a great talent and person. I loved every day last year getting to ride and train together. I might be a little biased as he’s a fellow SA boy so I’ve followed him closer than the other riders. We get along really well as friends, and together we can both push each other.
Our young U19 rider Kaleb is up and coming and has the potential to win this year’s championship. As a matter of fact, we all can!”

Steve McKinnon – SD3 Husqvarna Team Owner: “We are over the moon to have acquired Brett’s services for next year. To have him come back last year for one Supercross and four motocross rounds was just brilliant, so to have him for an entire Australian motocross and Supercross championship season is mind blowing for what I consider to be our still-little race team. We love having Brett and his family around us, we’re a family team and Brett fits in beautifully to that with Sheena and the kids. To secure his services is a real coup for our team and Husqvarna and I think we’ll have a fantastic 2017.
What I like about him, and I’ve said this to Luke a number of times, is that Brett is just a great pro. He is constantly about getting the best out of himself and from my dealings the only other person that I know of in Australia who is similar is Kirk Gibbs. Brett gets 110% out of himself day in and day out, and I love dealing with him. Nothing is complicated and what he says, he does. He has great integrity.”

Jon Hafey – Husqvarna Australia National Brand Manager: “I’m so pleased that we are heading into our fourth season now, in partnership with SD3 and Stephen and Dimity McKinnon. I’m over the moon that we have once again been able to grow that partnership, and build on what we had last year. This will be our fourth season with Luke, and our second with Kaleb and Brett and that’s great. SD3 is going in house this year with a work bay based out of our new headquarters in Sydney, alongside the enduro team, so it’s an exciting development that will make life easier for everyone.”