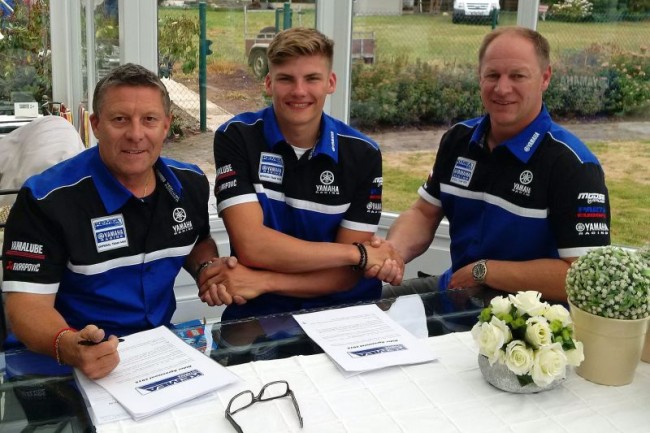 The KEMEA Yamaha team is pleased to announce Brent Vandoninck has signed a 3-year deal with the team.

The 19-year old Belgian is in his first season with the team, and has impressed a lot in his first GP races in 2015. He scored several top 10 places with as best result a 5th overall in Maggiora.

Marnicq Bervoets: ‘ I’m pleased to continue with Brent. It’s a pleasure to work with him and he has shown his capabilities already. He already progressed a lot but I’m convinced there is still room for improvement. Unfortunately his knee injury set him back a little but we haven’t seen the best of Brent yet.’

Brent Vandoninck: ‘ I’m really excited to stay in the KEMEA team. I feel really good within the team and I like the ‘family’ atmosphere. Everybody gets along well and we make a lot of fun, but when needed everybody is really professional. On top of that I never made that much progression in one season as I did this year. I hope this trend will continue for the future but I’m sure I can do this within this team. The YZ250F is great and I learn a lot from Marnicq. The team has a close partnership with Yamaha Europe to develop the bike and that’s great too. My goal for next year will be to finish within the top 8 in every moto, with hopefully some peeks.’

Next to the deal with Brent, the KEMEA team has also extended its partnership with Yamaha Europe. Like this the team will start it’s 19th year in the blue colors in 2016.