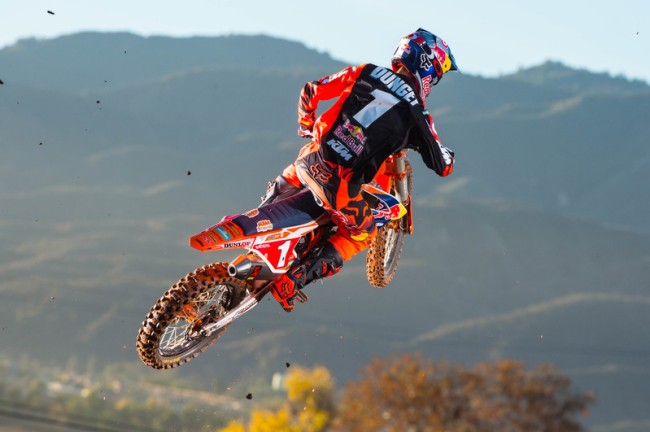 The injury happened when he crashed while battling for the lead on the opening lap of Moto 2 at Thunder Valley MX last weekend. Showing immense heart, Dungey bounced back from the crash and rode a remarkable come-from-behind race coming from 19th place back to 4th spot by the races end to finish 2nd overall for the round. After evaluation by several doctors this week, the doctors have confirmed that Dungey cracked his C6 Vertebrae in the fall and requires a minimum of 6-8 weeks healing time.

“It’s very difficult to share such disappointing news,” said Ryan Dungey. “It’s heart breaking mainly because of all the hard work the team and I have put in preparing to defend the motocross title this year. But I’m very thankful that the injury wasn’t worse. I will use this time away from racing to recover fully, knowing this will only make me stronger and more motivated. Thank you everyone for your support and understanding.” “

Obviously Ryan being injured is tough on the team,” said Red Bull KTM Team Manager Roger DeCoster. “At the time we didn’t know about his injury and we were so proud of the way he raced that second moto in Colorado coming from 19th place all the way to almost finish on the podium. But to now know that he accomplished that battling through the pain of a cracked vertebrae shows what an unbelievably tough champion rider he really is. The plan right now is to reassess his return to racing in 6 weeks’ time once he is reevaluated by his doctor.” The entire Red Bull KTM Factory Team wishes him a speedy recovery.