Breaking: Jasikonis fills in for Suzuki! 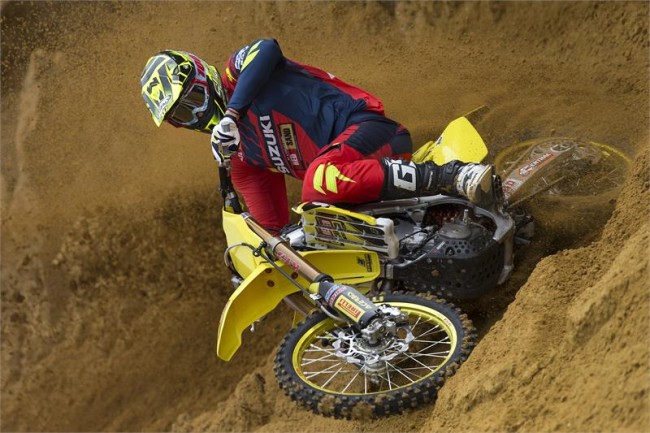 Eighteen-year-old Lithuanian Arminas Jasikonis will fill-in for injured Ben Townley at Team Suzuki World MXGP for the next rounds of the MXGP World Championship.

Jasikonis had caught the eye of General Manager Stefan Everts whilst competing in the ADAC MX Master class with his style and strength.

Townley sustained a severe injury during testing in Mantova, Italy. Being hospitalised since the accident, his condition has been improving slowly but steadily and the team hopes for a full and quick recovery.

Jasikonis, currently living in Belgium, is very enthusiastic about his move to Suzuki. “Yesterday was my first real training and I still can’t believe it. It feels like a dream, working with the best people in such a professional team. It is great to be there. And the feeling on the Suzuki is good,” the 1m 93cm-tall teenager commented. “I did not need such a long time to get used to the RM-Z450 and the bike handling is very good. It was all really impressive for a first ride.”

The Lithuanian is clear about his goal: “I just want to collect as many points as possible and a top-13 place would be really good,” he said.

General Manager Everts is also excited to start working with Jasikonis. “I’m happy to be able to give a young rider the chance to join a team at MXGP level. I’m looking forward to experience what Arminas can do,” he said.

The team will work intensively with Jasikonis for the next two weeks and he will join team-mate Kevin Strijbos for round 13 of the MXGP World Championship in the Czech Republic on July 24th.