Bobryshev on his first British Championship overall of the season 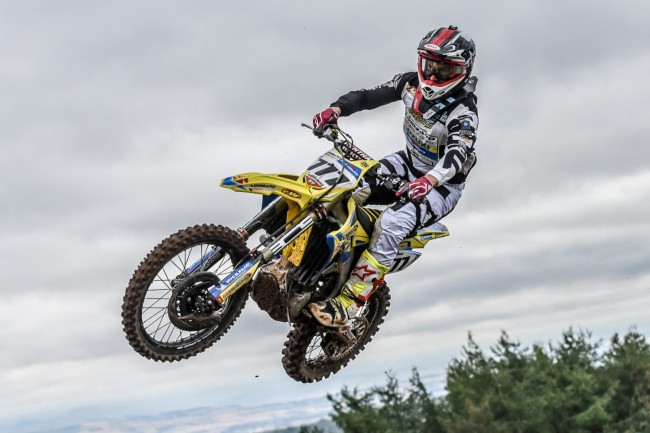 The Maxxis British Motocross Championship crossed the border to Scotland this weekend. The hillside track at Duns played host to round five of the 2018 campaign. After weeks of idyllic weather mother nature finally turned for the worse, meaning that the riders were facing difficult conditions to say the least.
Evgeny Bobryshev returned to the Scottish track after eight years away to post the second fastest qualifying time onboard his Lombard Express with Par Homes Suzuki. At this stage the track was in prime condition but with the rain becoming heavier and heavier the circuit was less than ideal by the time 450 moto one rolled around.
Bobryshev used a smart line keeping it tight around the first corner to emerge from the melee in third place. Knowing that staying out of the mud and the carnage was vital to success in this race Bobby put the hammer down early to make passes on Kristian Whatley and Ivo Montecelli to assume the race lead before the first lap was over. Bobryshev tackled the tough conditions with precision and poise to build a comfortable lead over his competition. The rain continued to fall throughout the moto but that didn’t stop the top four riders from charging hard, they pulled a big gap over the rest of the field. As the race came to a close the gap between Bobryshev and his nearest rival, Ivo Montecelli, was reduced somewhat but Bobby was able to command the race until the chequered flag to take his second moto win of the 2018 season. In this victory the Russian was able to the reduce the points gap to the series leader Jake Nicholls.
Throughout the afternoon the rain became much heavier and a thick fog rolled in over the hills. The sensible decision was made to cancel the second moto proceedings for the MX1 class, meaning that with his race one win Bobryshev walked away with his first overall victory of the season.

Evgeny Bobryshev (1st Overall) – ‘‘We had a crazy day at Duns. The rain was pretty much non-stop from 10AM. Free practice and qualifying was still good though; the track was still very nice and rideable. I was able to post the second fastest time and I was happy with that after just getting to grips with the track.
But for the first moto everything changed. The track was just full of water after the non-stop heavy rain. I pulled a good start and by the end of the first lap I was in first place. I just really concentrated on the track and I found some good lines, so I pulled away from the field. It was really quite a simple race for me, I was upfront leading by myself, I didn’t battle with anybody. The guys did catch me up a little bit towards the end but I still managed to finish first. I was really happy with that as its been a while now since a won a moto at the British championship.
For the second race we were all dressed up and ready to go. But no one really wanted to go out as the track was looking really bad. Eventually they decided to cancel the final moto as the visibility was too little and the track was getting a bit dangerous. I think that was a good decision, it would’ve been a lotto out there. We could’ve gained points, but we could’ve lost a lot of points also.
In a few weeks we have Hawkstone park. That’s a really nice track and I’m looking forward to that event.’’

Neil Prince (Team manager) – ‘‘All in all it was a good day for us at Duns. Bobby pitted on the first lap of practice and we made a tyre change. After that he went out and got the second fastest time. He was top three going into the corner of the first race and he made quick passes on lap one to get out front clean. He got the lead up to 10 seconds and controlled that until the end, which was difficult with the rain and the conditions. We are so happy to get the win and very pleased for Bobby, he rode awesome.’’