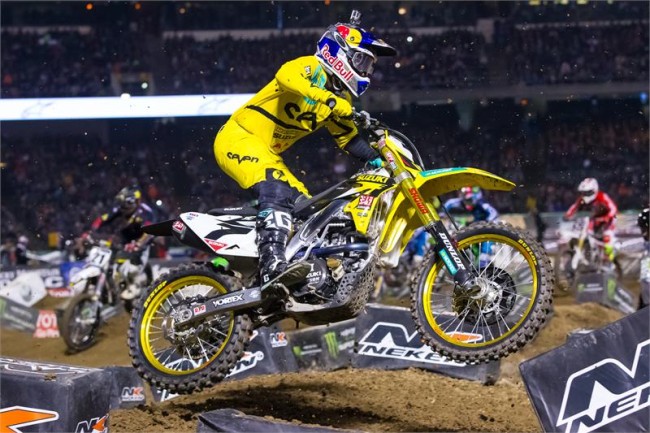 It was a day of firsts for Yoshimura Suzuki Factory Racing Saturday at Oakland’s O.co Coliseum at the weekend as both team riders James Stewart and Blake Baggett were back in action for the first time together in round four of the Monster Energy AMA/ FIM World Supercross Championship.

And while the final results weren’t what either rider hoped for, there was still a good feeling inside the squad going into the night for being back to full strength and having everyone at the track and working to move forward. That positive energy was tempered, however, later in the evening as Stewart pulled out of the race with vision issues and Baggett fell hard and banged the same shoulder he’d recently had surgery on.

Stewart was back racing for the first time since suffering a concussion at round one of the series early this month in Anaheim, and Baggett made his 2016 racing debut upon returning from pre-season surgery.

Both riders looked strong aboard their potent Yoshimura Suzuki RM-Z450s, especially Stewart, who led most of the way in his heat race before finishing second.

Ultimately it was a difficult night for the riders: Stewart ran near the front early in the final before pulling out of the race on lap nine. Baggett looked fast out of the gate, but suffered a big crash in his heat race, which tempered his approach for the rest of the night. In his first race of 2016, Baggett made it into the Main Event and then rode conservatively to finish 15th.

Stewart qualified straight into the Main with an excellent second-place performance in his heat race, which he led until the final lap. Baggett ran near the front in his heat before coming up short on a rhythm section and crashing hard. He rebounded and made the Main by way of a fourth-place in his semi.

In the Main Stewart used the starting power of his Suzuki RM-Z450 to get a solid jump and ran third early on. He looked good for about the first five laps before his lap times began dropping, with something obviously wrong. By lap eight he fell to seventh and then a lap later pulled off reporting blurred vision.

“James came in feeling he was good to go,” said Yoshimura Suzuki Team Manager Mike Webb. “He rode three days this week and put in a lot of laps. He was riding well and looked more like the old James. He was solid all day and did well in his heat although didn’t feel 100 percent. He got a great start in the Main but after a couple laps he started to struggle with blurred vision and by lap nine he pulled off. He’s going to get some tests done early this week and we’ll see where we are then.”

Baggett left Oakland a bit disappointed, in spite of meeting his main goal of finishing in his first race back.

“It definitely didn’t go as planned here in Oakland tonight,” Baggett admitted. “It was my first race back after a shoulder surgery. I felt pretty frisky in practice and got a really good start in the heat race. I was in fourth and then got into third and was battling. I got pushed high in a turn and went to seat-bounce a jump and just committed to the something I probably shouldn’t have, but it was in the heat of the moment. I got wheel-spin off the face and ended up endoing a rhythm triple and went down on my bad shoulder. From there the night was just tough. It [the shoulder] was just really sore. I’ll have to go back and rehab a little bit, but luckily everything I got surgery on is still good, just a little muscle sore.

“I fought through the night and dug deep, but was definitely in survival mode from lap one of the Main Event, so we’ll see how we can do next week in Arizona.”

Team Yoshimura Suzuki Factory Racing will be back in action this coming Saturday, February 6th in round five at University of Phoenix Stadium in Glendale, Arizona, which is a new venue for the Supercross series