Billy Mac signs up for Arenacross! 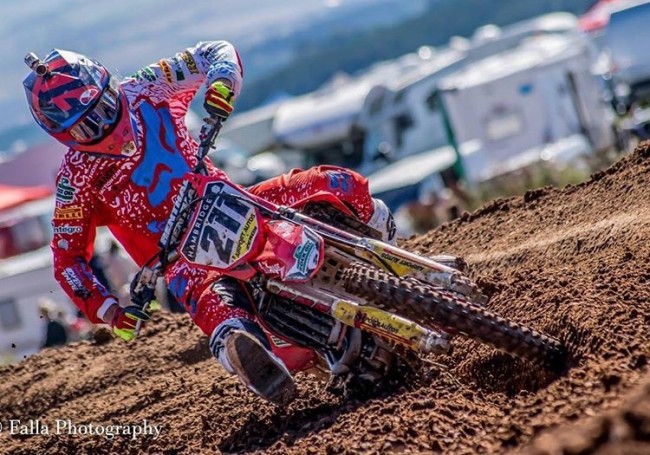 Billy Mackenzie is, without doubt, one of the most successful motorcycle racers to come out of Scotland, and he’ll be giving it his all at the Glasgow round of the 2017 Arenacross Tour on Saturday the 14th of January, gifting his legion of fans with a golden opportunity to once again catch him in flat-out action.

Mackenzie, who clinched the MX1 British championship in 2007 and 2008, was the first-ever Scottish rider to win a World Motocross GP and represented Great Britain in the Motocross des Nations on six occasions. He moved to Australia in 2010 where he continued riding competitively, using his legendary raw speed to keep him at the top of his game. Returning to the UK last year, the 32-year-old contested a number of outdoor races and is now revved up about AX, an event he says that has got him excited about racing again.

Born in East Lothian, but now living close to Glasgow, Mackenzie will enter AX riding a Honda under the guidance of multi-World and multi-British MX champ Dave Thorpe.

There’s little doubt that Mackenzie has a credible success story in the sphere of motocross and he’ll be sure to have an army of supporters cheering him on. Arenacross though is as popular for its razzmatazz, lights, lasers and music as it is for the fast and furious racing. Add to that the noise of a hollering partisan crowd, and the roof is set to be raised at Glasgow.

Prior to the commencement of the 2017 Tour, Arenacross caught up with the former champ for a quick Q&A;

AX: When was your last competitive race?
BM: The last time I really focused and competed in a professional race was the last round of the Australian championship at the end of 2014. I scored the overall win that day, it was a nice finish to my time in Australia. I did a couple races here in the UK after, but it was more just to have a play and test how I was feeling about racing.

AX: Have you ever raced indoor SX?
BM: Yes many times, here in the UK and some supercross races in Australia, although the tracks in Australia were outdoor races.

AX: Arenacross is often down to the start, are you quick out of the gate?
BM: Yes, I’ve always been pretty good off the start and that’s important for Arenacross. With its short, sharp laps, every inch counts.

AX: How will the tight and twisting tracks suit you?
BM: I’m sure I will get the hang of it more with every lap. I don’t mind the short sharp races as I have always had an intense pace at the start of races, so I’m hoping it will work in my favour. I enjoy the more technical parts of the tracks.

AX: What about the format?
BM: There’s a lot of track time with the practice sessions and then Pro heats. And for me, the more time out on a race track the better.

AX: Pro riders finishing ninth to 16th will go into what many riders regard as the ‘dreaded’ head-to-head. How will you feel if you are in that eliminator?
BM: I have had some practice racing those types of events in the Australian supercross series, so
I’m sure it will be fun. I will take whatever comes to me, but I hope I don’t end up in the eliminator!

AX: You’re riding under Dave Thorpe’s AX umbrella. How do you feel about that?
BM: DT’s team is the most professional and experienced team in the paddock, and it’ll be great to have the support of the Buildbase Honda set up again. It’s also good fun being more involved with the set-up of my own bike and working closely with Keith Amor and his brother Guy Amor in our new X-AXIS.co garage. We have built three custom Honda’s to date, not to mention the race bikes Keith used to race the Isle of Mann TT. So it’s far more exciting for me than going racing how I used to.

AX: What enticed you to have a crack at AX?
BM: I just like racing, I have raced my whole life and I enjoy the challenge. The opportunity to race in front of a home crowd was something that appealed to me after spending so long abroad. It will be the little bump-start I need to get some laps in this year. Fun track, local race, great team.

AX: How much do you know about Arenacross?
BM: I’ve watched it since it started. I’m a big racing fan and, when it comes to great racing, Arenacross is up there with the best of them. It is a great show, well organised and has some very, very fast riders.

AX: Do you know any of the other Pro competitors?
BM: Yes I know the names, but it’s been a while since I raced everyone. I’ve been in Australia for the last five to six years so it will be all-new to me.

AX: What are you most looking forward to about AX?
BM: Getting my heart rate up, some close racing on a dry track, being part of the whole hype, spending time with the team and getting back into that racing mind.

AX: Will you give the Scottish fans something to cheer about?
BM: I’ll try my best and I’m sure that if they get behind me, I’ll give them something to talk about.

The last word on Billy Mac’s AX venture went to the aforementioned Thorpe; “Billy’s status in the sport is immense. He’s had an association with Honda through his classic bike restoring business and so when the opportunity came up for him to have a one-off ride at AX, it was the perfect opportunity to get him out on a Honda in Buildbase livery. Anything can happen in Arenacross and no-one can rule Billy out. Can he get on the podium? Who knows? But one thing is for certain and that is that he will be exciting to watch.”

To see Billy Mac in action at Arenacross on Saturday the 14th of January 2017, head over to www.arenacrossuk.com where tickets are now on sale.