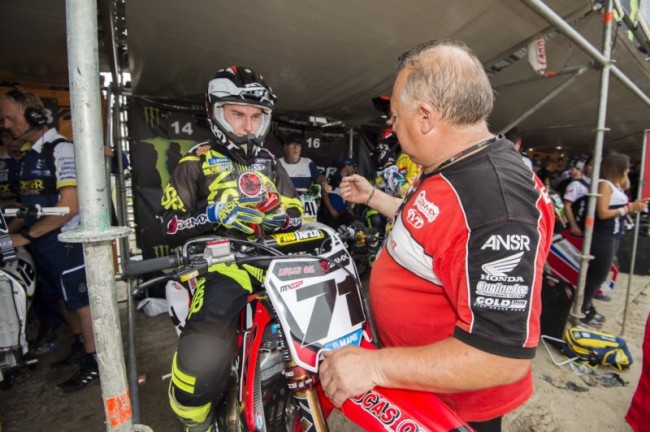 No less than four riders will line up this weekend in Kester with a shot at winning the Belgian MX1 title. With 3 motos and 75 points up for grabs fans are in for a day of excitement and suspense. 24MX Lucas Oil Honda’s Damon Graulus is just 7 points behind series leader Brent Van Doninck. Kevin Strijbos is third, 10 points behind and even former world champion Steve Ramon has a mathematical chance. Ramon sits in fourth, 14 points down on the number one.

The extremely tight differences at the top going into the Belgian motocross Championship’s final are only one element of interest. An entirely new, natural track adds another element of  uncertainty to the much-anticipated showdown! We sat down with Damon Graulus to get his thoughts on the weekend ahead.

You didn’t go to the Charlotte or Glen Helen MXGP races. How did you spend the last couple of weeks?
Damon Graulus: “Actually I needed a little bit of rest after the last European round in Assen. I hurt my left shoulder in a crash there but everything is fine now. I feel good on the bike and we took advantage of the excellent weather to get some good practice in. Until I started riding again I stepped up my physical training on the mountain bike and road bike.”

The orginal Kester track hosted several GP’s and it was one of the most liked courses of Flanders. What do you know about the new terrain?
Graulus: “I don’t know that much about it! (smiles) Steve Ramon knows it best because he helped the club a bit with the course design. During the press conference a couple of weeks ago I learned that it’s a natural hillside track, pretty old school. It’s completely different from the tracks we’re used to in the world championship. This is not the perfectly groomed and ripped soil that’s so common now, but I don’t really mind. Actually I like the fact that you have to search for grip yourself, use your throttle control to go fast. Orp-le-Grand, where we rode the last Belgian Championship race, is another track like that.”

Many riders seem to be fond of these old school tracks?
Graulus: “Yeah, especially on a 450 it’s quite an adrenaline rush to use your feeling and see where the limit is. Because you have to find your own lines. There’s no comparison between this type of terrain and more modern tracks. Perhaps it’s also the change itself that makes it cool you know? Kester will be pretty extreme in the way that the club is limited in what they can build for jumps. In the World Championship it’s the opposite! I absolutely love jumps but sometimes it’s just too much. Do you need a jump or an obstacle on every single straight?”

How do you approach this race, to win the Belgian MX1 title would be massive!
Graulus: “Absolutely. I will give it my best shot and I’m going for the championship. If you’re only 9 points behind you would be stupid not to or to say anything else! Of course it will be close and exciting but I have nothing to lose. Last year it was between me and Brent Van Doninck for the Dutch MX2 title. Going into the last round I was leading, that’s a different situation than the one I’m in now. But I managed to win. I also took the Belgian and French MX2 titles before so those experiences help to keep a cool head! I think it will go right down to the wire with everything to be decided in the last moto.”

On paper you could argue that Kevin Strijbos is the strongest but his two eleventh places at the American GP’s might suggest that he has passed his best shape this sason.
Graulus: “Perhaps, but I wouldn’t read too much into that. Kevin has the speed and the experience. I think how you feel on that particular day can make a huge difference. If Strijbos is not at his best level and I’m doing really well I can pull it off. But the same goes for Brent Van Doninck, if he’s up there for three motos it’s going to be tough to beat him. And of course the additional top riders like Jeffrey Herlings and Jeremy Van Horebeek will be gunning for the “big points“ which could make the difference between the title contenders even smaller!”

Do you see the ‘20 minute plus one lap’ races as an advantage for yourself compared to the longer MXGP format?
Graulus: “Not really no. Physically I’m in great shape so I know I can do the longer motos. And racing is racing, so you want that good start and you’re aiming for consistency. Only in the Belgian Championship it’s a bit easier to conserve your position after the initial hectic first laps while in the GPs you can almost never rest. You will be chased down the line for 15th until the flag drops.”

Good luck in Kester.
Graulus: “Thanks!”