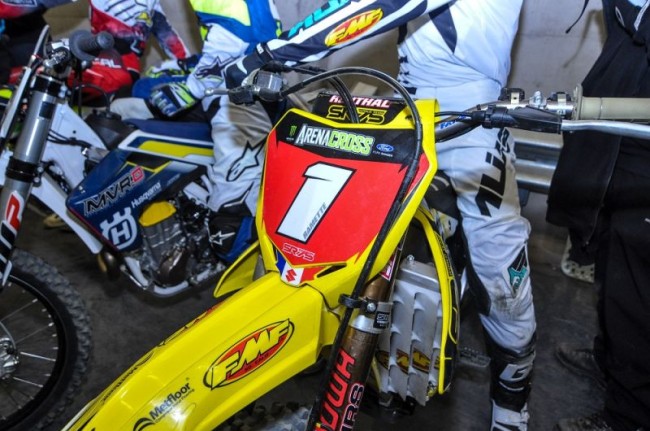 It’s a tight but a good track here in Belfast with the riders having some good options in the rhythm sections.

Triple, double, single seemed to be the favourite rhythm in the first section but some guys tried a triple, triple in there too. The other rhythm section was again varied but it bit Gradie Featherstone hard, Featherstone went to triple in (many had done it before) but unfortunately endoed and went down hard holding his wrist. Hopefully he will be ok for tonight but he looked sore.

Josh Hansen was hitting the whoops hard..jumping the first four before blitzing the rest in the second session, but they rebuilt them for session three and Hansen was back to blitzing them all like the rest. Hansen likes staying slightly tight to the inside of the whoops which gives him the inside in the final turn, whereas the Frenchman stay more towards the middle – there could be some action there tonight!

Izoird looked to the the fastest in the whoops and was really carrying some serious momentum, but all the French boys are on the gas, there should be some seriously competitive racing tonight.

The track’s dirt is the softest of the three rounds but for Belfast, it’s really not bad at all and the track maintainance crew are doing a good job at limiting the damage.

Josh Hansen and defending champion Thomas Ramette headed their respective qualifying group but it was Ramette with the quickest time overall – he has everywhere dialled and just carries the momentum. Current points’ leader Soubeyras looks good and has some nice corner speed and some serious aggression.

Meanwhile British boys Adam Chatfield and Jack Brunell are looking fast and aggressive too, as does Matt Bayliss and they will want to put it amongst the French boys and Hansen tonight!

The start will be crucial and any one of the six or seven guys could win! It’s going to be good!