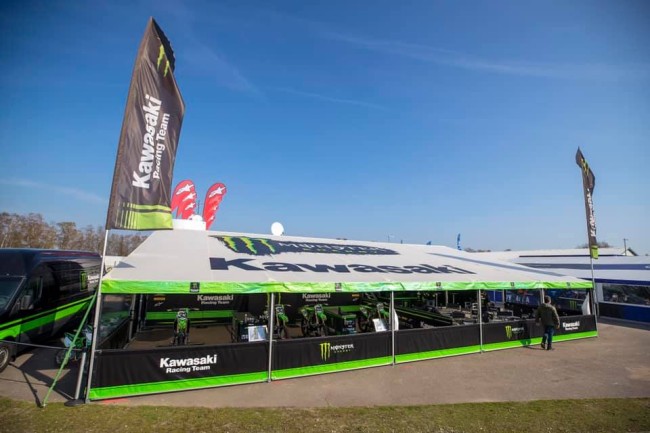 The Monster Energy Kawasaki Racing Team is back in action this weekend at Loket in the Czech Republic for the thirteenth round of the FIM World MXGP Motocross Championship.

Forced to skip the Indonesian GPs due to the injuries of their riders KRT is back racing in the Czech Republic with Tommy Searle, who joined the factory team this summer. The British rider found many new faces when he joined the team to test the factory KX450–SR, but one member of the crew was familiar to him as Antoine Cancian was his race mechanic a few years ago when he was racing in the MX2 class.

After nine seasons as mechanic, Antoine has a new role this season and is one of the men ‘behind the scenes’ who work with passion and dedication all year long. “It was a kind of dream for me to become a mechanic as I was not good enough to be a racer,” he explained with a smile. “I think that most of the mechanics in the paddock start their career on a motocross bike, and for me it was a dream to become a mechanic so I went to a specialist college to learn the job and then to try to find a team. I was lucky to find a position with Team CLS, so until now I have spent my entire career working on Kawasaki’s,” added Antoine, who has worked with many different riders during the past few seasons. Moving from CLS to KRT a few years ago he got the opportunity last winter after nine years as a mechanic to get promoted and he is now the chief mechanic. It is a new role for Antoine, but he retains the same enthusiasm and passion. “I wasn’t really dreaming about getting a new job, but I was hoping to be offered a different job than being a race mechanic; the passion is still there – you can’t work inside the paddock without passion – but it was time for a fresh challenge, “ he admitted.

With such a huge amount of racing experience, Antoine felt immediately at home in his new role. “Today my job is to prepare everything – I mean parts, tools and so on – so that the race mechanics have always everything at hand which they need to work wherever we are, whether it be at the workshop, in Argentina or at Loket. Luckily I’ve got a strong team around me where everyone knows what he has to do, and we all work together in a great atmosphere,” he continued. “When you’re a race mechanic you have some pressure but I also have some, even if it’s a different one. I would say that for me the racing weekends are more relaxed, but when we’re back at the workshop it’s different. It was not so easy the first few weeks as it’s a new job with more responsibilities, but thanks to our team manager François and Vincent it didn’t take me long to feel comfortable in my new role.”