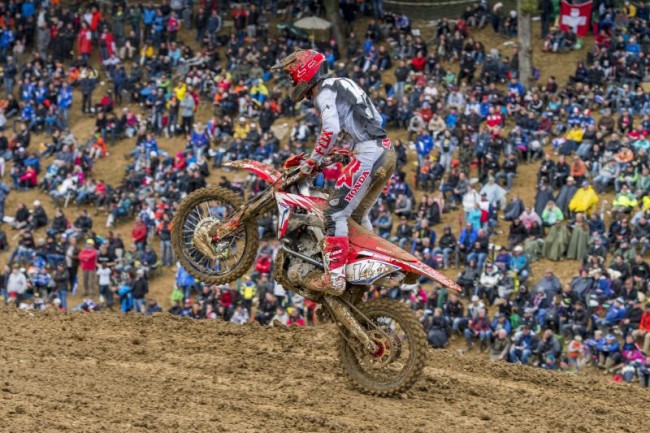 Jed Beaton took an incredible third place overall on the new CRF250RW today at the final MXGP of the season in Villars Sous Ecot.

With track conditions similar to that of yesterdays qualify race, the first race was a spectacle, with only the top six riders making it round the track. Beaton was one of those riders after an excellent start meant he quickly got into fourth place and out of trouble. The Aussie tussled his Honda through the mud, staying smooth and controlled in the treacherous conditions.

His consistency was rewarded as he took third place, gapping fourth by 20 seconds.
In the second race, another good start got him into the top five and he sat just inside this for the majority of the race. Then; on the last lap, Beaton passed Seewer for fourth which was enough for him to take third overall, his best result in his racing career to date.

Jed Beaton
My Saturday went pretty good, I had a good qualifying race which meant I had a good gate pick and that helped a lot. My starts this weekend were a lot better too. I was a bit lucky with Seewer crashing on the last lap of the second race as that enabled me to get third overall. I wasn’t originally going to race in MX2 this weekend but thankfully Carglass Honda released me and allowed me to take up the opportunity and I am really grateful for that. To get third overall in my fourth ever MX2 race is a really awesome feeling, it was awesome to see the team so pumped about it and they have been so good at setting the bike up for me as I only raced it for the first time in Assen last weekend.

Roger Harvey
HRC General Manager – MXGP
It has been a very pleasing day for us today in what were extremely difficult conditions. It was the same for every rider but in order to survive you need to remain consistent and Jed did just that. He had only been put on the CRF250RW last week in Assen for the first time, we essentially just threw him on it but he has just gelled with it. The podium result today is proof of that and a great way to end the season for everyone. We couldn’t have asked more of him, it was a great effort. Thank you to everybody, the team, the HRC technicians from Japan and of course Jed himself. Extra special thanks have to go to Carglass Honda for releasing him to us this weekend.