Beaton, de Wolf and Jasikonis on their weekend 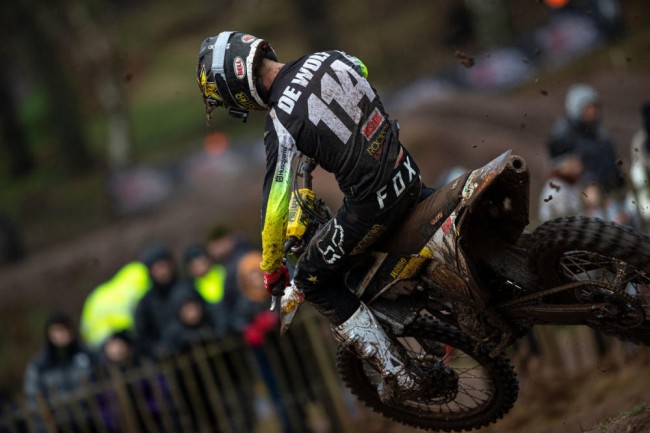 Rockstar Energy Husqvarna Factory Racing’s Jed Beaton and Kay de Wolf today got their first taste of competition in 2020 with the FC 250 mounted pairing rounding out a wet and windy Hawkstone International with respective fourth and fifth-place MX2 class results.

Despite hugely challenging weather and difficult, sandy track conditions both Beaton and de Wolf showed impressive speed around the iconic British circuit. Finishing fourth overall, Australian Beaton kicked his day off with a seventh-place finish in race one. Charging his way forwards from 20th, despite the near torrential rain, he broke inside the top 10 for a hard-fought seventh.

Saving his best until the day’s second MX2 moto, Beaton had a much more straightforward race compared to the rain-lashed first race. From a mid-pack start he quickly worked his way into third and then into the runner-up position where he remained alone for many laps before eventually securing a deserved second-place result for fourth overall.

Starting well in the opening MX2 moto, the youngster moved himself up as high as second and onto the wheel tracks of race leader Tom Vialle. Holding second for several laps a mistake eventually saw Kay finish fourth – a hugely encouraging result for the 15-year-old.

Race two saw de Wolf forced to work hard as a mistake while in fifth dropped him to 15th. Giving his all he got back up to his eventual finishing position of seventh for fifth overall.

Opting not to compete at the Hawkstone International, Thomas Kjer Olsen is focused on his continued preparations ahead of the opening round of the MX2 World Championship.

Competing as Rockstar Energy Husqvarna Factory Racing’s sole rider in the closing round of the 2020 Internazionali d’Italia MX series, Arminas Jasikonis completed his participation in the three-round championship with mixed fortunes at Mantova. Gelling well with the jump-filled track, AJ set an impressive time during timed practice but saw two small crashes prevent him from challenging for the podium in both the MX1 and Supercampione races.

Completing the opening lap of the MX1 race just inside the top 10, Jasikonis worked his way to sixth by lap three before holding fifth for the next three laps behind Ivo Monticelli and Mitchell Evans. While looking for a place to pass, the tall Lithuanian span out in a turn, becoming temporarily pinned underneath his bike and losing both time and positions. Remounting, he worked his way back to seventh at the chequered flag.

Jasikonis’ hopes of an improved performance in the Supercampione race were soon ended when a collision with another rider on the start straight brought him to the ground. Down in 20th at the end of the first lap he broke inside the top 10 by mid-race distance before working his way up to sixth at the finish.

With his participation in the 2020 Internazionali d’Italia MX series now complete, Jasikonis is now focused on the opening round of the FIM Motocross World Championship, in three weeks’ time.

Due to still feeling less than 100%, Jasikonis’ teammate Pauls Jonass opted not to compete at Mantova and will now race the Masters Lacapelle-Marival international in France next weekend.

Jed Beaton: “Today was my first race in quite a while so I was easing myself back into it. I got off to a really bad start in race one and with the heavy rain it was a tough opening few laps. I managed to get into a rhythm and started moving forward. It was raining the whole time so it was a bit of a miserable moto, but it was good to be racing again. The second moto was much better. I got off to a much better start and managed to avoid some chaos in the second turn. That put me into fifth position and then I made a few passes and moved into second. By the time I got there, the leader had checked out. It was great to be in second and ride my own race, which I held to the flag.”

Kay de Wolf: “In the first moto I had a really good start. I came out of the gate in third or fourth and just rode my own race. I battled for the lead for a few laps but then had a small issue with my goggles. I managed to find my flow again and finished fourth. Second race, I came together with someone in the first corner but managed to stay upright and made some quick passes. I then made a small mistake in a corner and lost the front end and crashed. I regrouped and made some passes in the closing stages of the race, which was really good. It was a tough race but I kept pushing and finished seventh. It was a challenging track today, but I enjoyed my day at Hawkstone Park.”

Arminas Jasikonis: “My results this weekend weren’t what I’d hoped for, but overall I’m really happy with the way all three rounds of the Italian championship have gone. And today I enjoyed racing as much as I can ever remember, it was so much fun. I felt really good and everything went well during practice and qualification, I just had a couple of small crashes that cost me a lot of time in the main races. In the MX1 race I was comfortably in fifth and focused on the riders ahead, then just washed out the back wheel in a corner and got my jersey and handlebars locked together on the ground. It was really strange and lost me some time. But my riding in that moto was good, so I’m happy. In the super final someone rode into my back wheel on the start straight and I was way back. But I enjoyed it so much after that. I rode well, was charging through the 250 riders, and felt good on the rough track. I’m feeling good now ahead of the first GP.”