Barr, Shipton and Bruce on Lyng 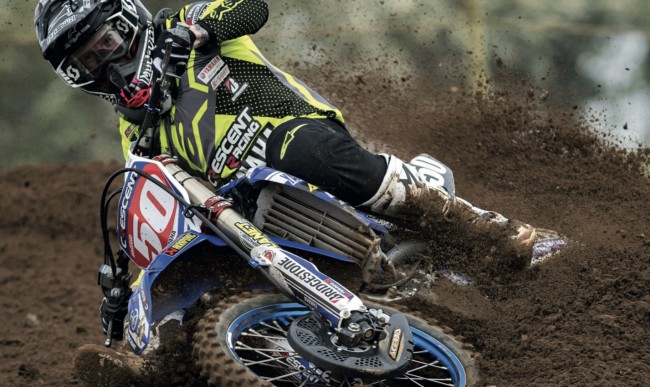 Crescent Yamaha’s Martin Barr retained his Pro MX2 championship lead at round three of the Michelin MX Nationals at Lyng on Sunday despite failing to score in the second moto following a big crash.

The series ‘Fastest’ 40 format mixes MX1 and MX2 machines together – although they are scored separately – in the two 25-minute plus two lap points-paying motos which meant Martin was up against it on his YZ250F at the Cadders Hill circuit with its notoriously fast uphill start straight calling for maximum horsepower.

After qualifying in fourth, the tough Irishman was held up in the first turn of the opening moto and had to battle his way past his MX2 rivals as well as 450cc riders and had advanced to second in class by the time the chequered flag came out.

In race two he was involved in a big pile-up in the first turn and went down hard. Red flags came out to stop the race and Martin was in no fit state to make the restart but his main title rival, Josh Gilbert, was also unable to take his place behind the gate, ensuring Martin held onto his lead in the championship chase.

Competing in the Pro MX1 class, Jake Shipton had a solid day on his YZ450F. Qualifying eighth, he put in two workmanlike performances and was rewarded with 6-7 finishes for seventh overall.

The team’s youth rider Bobby Bruce was in action in the MXY1 class on his YZ125 two-stroke and after a stuttering start to the championship he finally showed his class.

Qualifying first, he raced to a pair of second-placed finishes on Saturday before winning both his motos the following day to claim the top step of the podium and leap from ninth to fifth in the points table.

“I’m not too bad but I’m a bit sore. It was a big crash but that’s racing and it happens every so often. As long as nothing’s broken I’ll be back to fight another day.

“It’s been one of those days. Qualifying didn’t go to plan and I never really got a good lap in and ended up fourth but I still got a good gate pick and my start was okay in the first moto although I got caught up a bit in the first corner. I was about fifth in MX2 but I put my head down and started pulling forward and managed to get up to second in class.

“I was beginning to close Josh [Gilbert] down but I used my head and didn’t push too hard because I didn’t feel like I had a really good flow going.

“I was really looking forward to race two. I went and had a good look at the track and saw a few different lines but unfortunately I didn’t get very far! I went down pretty hard but luckily I’ve got no major injuries. Josh DNFed as well which has kept the championship open and I’ve still got the red plate heading into round four which is the main thing.

“I’ll go home, rest up and come out swinging in a couple of weeks’ time at the next round of the British championship.”

“I was quite chuffed with my result because Lyng is one of my worst tracks – I just don’t seem to gel with that place at all – so to get a couple of solid results and be consistent is decent.

“I had the starts dialled which I was pleased with but it was a little frustrating because I struggled to get a good feeling and seemed to be hitting every bump on the track.

“In both races I made the same mistake out in the back section in the field which cost me places. Still, I scored good points in both motos so not the worst day’s racing.”

“It’s been a really good weekend for me. I was first in qualifying but then didn’t have the best two races on Saturday and never really found a rhythm.

“Sunday was much better though. The track was rough and we were out last so it was brutal but I got out front in both races and took a couple of wins to get first overall.

“I’m now up to fifth in the championship which is good considering how many DNFs I’ve had this year.”