Barr and Irwin talk about Blaxhall! 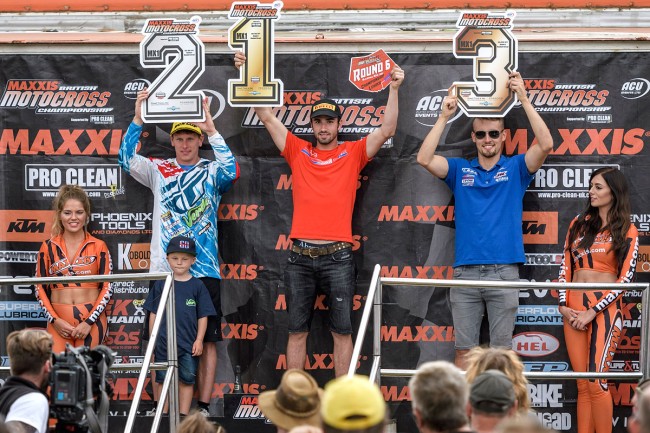 Buildbase Honda’s Graeme Irwin raced to his third consecutive maximum score at round six of the Maxxis ACU British Motocross Championship supported by Pro Clean at Blaxhall on Sunday to open up a 52-point lead in the MX1 title chase.

His double win at the sandy Suffolk circuit means the Irishman could clinch the biggest prize in domestic motocross one round early at Preston Docks at the end of this month.

After qualifying second Graeme holeshot the opening moto on his CRF450R before the race was red-flagged following a crash. From the restart he again led the field around the opening turn and was never headed, extending his advantage to over 10 seconds at the end of the 25-minute plus two lap race.

He again reacted quickest when the gate dropped for race two and despite slipping to second in the early stages the victory never looked in doubt. Moving back to the front at half-distance he put on a display of controlled aggression to win by over seven-and-a-half seconds.

“There was a lot of talk before this race from a lot of guys who were all coming here to win so it’s good to be the man who actually did win both races today,” he said. “This is all that matters to me – I don’t care about any other series, this is the one that I want to win and to go 1-1 here and extend my lead to 52 points is perfect.

“I can wrap the title up one round early at Preston Docks and that’s the goal now.”

Competing in MX2 on his CRF250R, Graeme’s team-mate Martin Barr struggled out of the gate all day and paid the price with his 6-3 scorecard leaving him just two points off the podium and only eight away from the overall win.

“It’s been a really frustrating day for me today,” said Martin. “I qualified fifth which gave me a decent enough gate pick but unfortunately my starts today were very poor.

“In the first race I spun too much and I think I passed the mechanics’ area in 22nd on the opening lap so I had a lot of work to do. I dug deep and kept my head down and eventually got back to sixth which was frustrating because my lap times were really good.

“In race two I wanted to go out and put it right and my jump was a lot better but me and the rider beside me hooked bars and I almost went down.

“Again, I had a lot of work to do on a track that’s not easy to pass on but I kept pushing and worked my way back up to second but on the last lap I made a mistake and Ben Watson got better drive out of a corner and jumped by me.”

With two rounds to go Martin sits second in the championship, 42 points behind the leader.

“I want to be winning races and clawing championship points back on Ben,” he added, “but there’s still 100 points up for grabs and I’ll just keep putting my work in.”

Team boss Dave Thorpe was full of praise for both his riders.

“Graeme’s riding well,” he said. “He’s not putting a foot wrong, he’s using his head in every aspect of his racing and long may it continue. It would be a great achievement if he could wrap it up at the penultimate round in a fortnight.

“Martin’s day was all about the first 50 metres. In the first race possibly he would have been better with a paddle tyre because he definitely span but it was a fantastic ride from where he was.

“For the second he put a paddle on and had a much better start but unfortunately tangled with someone on the start straight and nearly went down which put him about 20th around the first turn.

“To get back to second and be battling with Ben Watson on the last lap was a great ride but I feel if he’d started in the top five he’d probably gone on and won both races.”