Barr and Irwin talk about a successful day at Foxhill 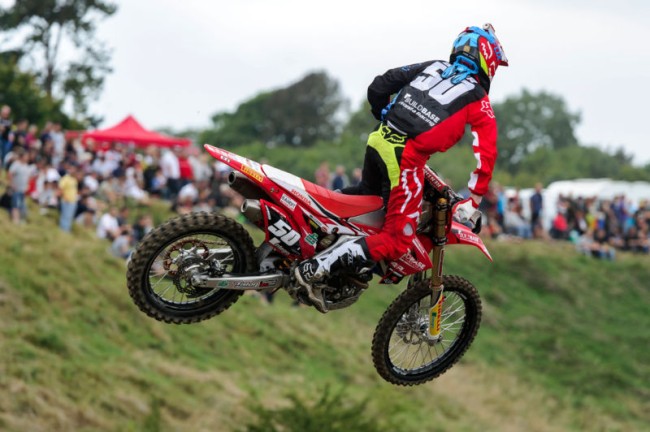 Buildbase Honda Racing’s Martin Barr ended the 2016 Maxxis British Motocross Championship on a high with the overall MX2 win at today’s eighth and final round of the series staged at Foxhill in Wiltshire.

The Irishman ran 2-2 on his CRF250R around the fast and spectacular former GP track to close to within nine points of championship bronze.

His team-mate Graeme Irwin, who spent Saturday in hospital with food poisoning, just missed the podium in MX1 on a tie-break after carding 3-4. He also ends the season in fourth.

“It’s been a really good day,” said Martin. “I was fifth in qualifying but maybe should have stayed out an extra lap because the track was drying all the time.

“I got a decent start in the first race and came out of the opening turn in fifth or sixth and worked my way through to second. I felt really good today and the bike was working absolutely fantastic. I got another okay start in race two and it was pretty much a repeat of the opener with me moving up to second and 2-2 was good enough to win first overall today.

“It’s great to finish the season off strong and it’s given me a lot of confidence going into the Motocross of Nations in Italy next weekend for Team Ireland. My championship finish could have been better but all-in-all it’s been a pretty solid year.”

Graeme, who joins Martin on the Irish team in Italy for the MXoN, nearly didn’t make it to the start gate after suffering agonising stomach cramps the previous day.

“I had really bad food poisoning on Friday night and was in hospital all day yesterday but managed to make it to the race today,” he said. “I was real happy to top qualification and it was great to lead the opening race for the first few laps.

“I was disappointed to miss the podium on a tie-break after finishing fourth in race two but my thumb was pretty painful over some of the bigger jumps so I’m not going to beat myself up over it too much. I felt like I had no energy and would love to see what I could have done if I’d been fit.”

Team owner Dave Thorpe was happy with his riders’ form.

“Martin’s rode brilliantly today to run 2-2 and take the overall win,” he said. “It’s a great way for him to end the championship and he’ll go into the winter with his confidence on a high.

“It’s obviously still early days as far as Graeme’s thumb injury is concerned so he couldn’t scrub properly and when he did scrub he had a lot of pain. He was taken into hospital yesterday with a suspected appendicitis and was there until late last night. It was probably food poisoning and for the last 48 hours he’s hardly eaten.”

With the domestic season over Dave reflected on a 2016 campaign that’s seen Martin and Graeme both win Pirelli British Masters and Michelin MX Nationals titles and finish fourth in the Maxxis championship.

“As a team we’re absolutely chuffed to bits with Martin and Graeme,” he added. “They both finished fourth in the championship which isn’t what we were hoping for but out of the three championships we’ve contested we’ve won two so we’re more than happy.

“I’d like to say a huge thank you to everyone involved with the team. Rob, Willie, Ryan, Nick – they’ve all been fantastic – and Ryan and Martin Barr Snr have done a great job on the engines.”