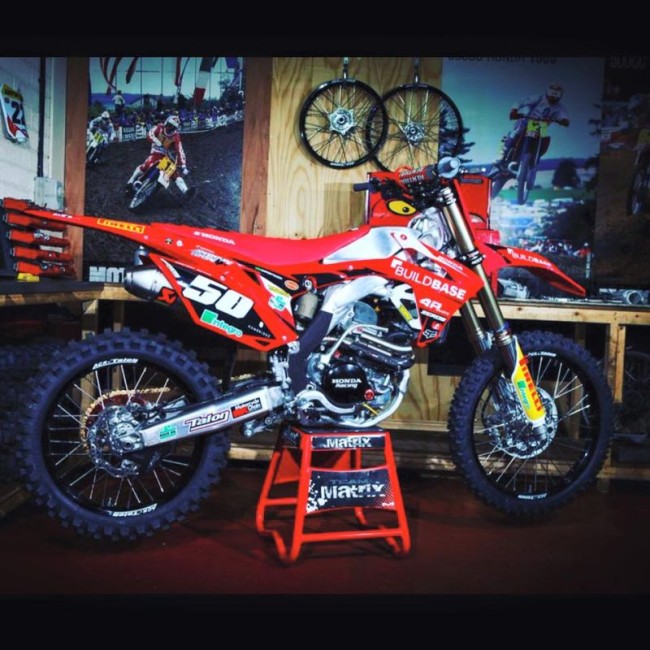 Graeme Irwin extended his lead in the Michelin MX Nationals and was joined on the Pro MX1 podium by his Buildbase Honda team-mate Martin Barr at round four of the series at Sherwood MX Park on Sunday.

Despite suffering with a chest infection for two weeks leading up to the event the Irishman ran 2-3 for second overall and now leads the series by 24 points with two rounds to go.

“I felt the track was a bit sketchy and didn’t want to take any chances but having said that I didn’t feel on top form today,” said Graeme. “I still increased my lead in the championship which is great but I’ve been sick for the last couple of weeks and on antibiotics and haven’t ridden so I suffered from arm-pump.

“Round six of the Maxxis is up next at Blaxhall next weekend and I’m confident I’ll be back to top form by then.”

The MX Nationals format runs the Pro MX1 and MX2 classes together in two mixed-capacity races and Martin, who moves up from his usual CRF250R to a CRF450R for the series, recovered from a first turn crash in the opening 30-minute plus two lap race to come home sixth in class.

In the second moto he stayed out of trouble through the first turn and took the lead at half-distance before slipping back to second at the flag for third overall.

“A few people went a little bit kamikaze in the first corner of the opening moto and I got taken down,” said Martin. “That gave me a lot of work to do but I got back to sixth at the flag which I was happy with although obviously it wasn’t where I wanted to be.

“I wanted to put things right in the second race and started third behind Elliott Banks-Browne and Graeme, gave it a few laps to see what they were doing and then put a push on and got into the lead.

“With about four laps to go I made a bit of a mistake and Elliott got back by me but on the last lap I had another go. We touched a couple of times and it was pretty close but I nearly went down which allowed him to pull a little gap.

“Obviously I wanted to win today but that’s racing, I just seem to keep getting caught up in a few first lap dramas but I’m happy to be able to race with the guys who are on the 450s all the time and I’m looking forward to Blaxhall next weekend for the next round of the British.”

Ryan Thorpe, who was overseeing the team effort for his father Dave, was satisfied with his riders’ performances.

“It was a solid day for the team,” said Ryan. “Martin went down in the first corner of the opening moto and came from dead last back to sixth which was a good ride and Graeme was second after suffering from arm-pump.

“In the second race Martin was third but passed his way into the lead before making a mistake that dropped him back to second. Graeme wasn’t too happy with the track and he was looking at the bigger picture so he played it safe and settled for third.

“He’s got a good lead in the championship and is also leading the Maxxis ACU British Motocross Championship and wasn’t willing to hang it out too much today which is understandable.”