Barcia to fill in for Yamaha! 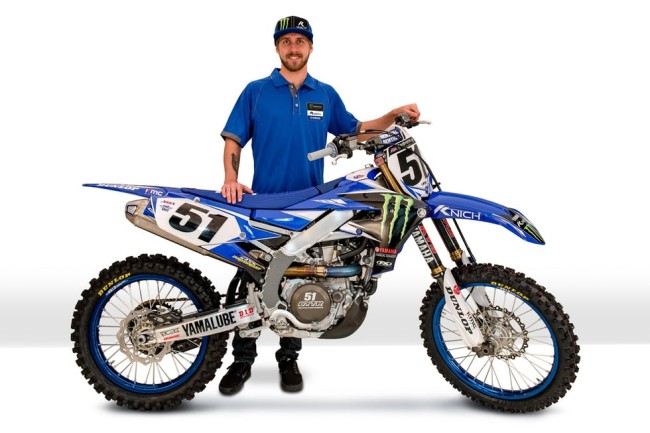 Monster Energy/Knich/Yamaha Factory Racing’s Davi Millsaps had surgery last week due to complications with his left elbow that he fractured in early October while practicing for the Monster Energy Cup.

According to Keith McCarty, Motorsports Racing Division Manager for Yamaha Motor Corporation, U.S.A., “We initially hoped that Davi’s fractured elbow wouldn’t require surgery, but it’s been a particularly difficult injury, so he had surgery last week in order to take care of some lingering issues. We’re hopeful that the procedure will improve the timeline for his recovery.”

Davi commented, “Unfortunately, I pretty much shattered my elbow when I crashed last month, and Dr. Viola in Colorado performed surgery this past Wednesday, November 8, to repair the damage. Dr. Viola said that everything went well with the procedure, and he’s confident that my elbow will be 100%. I hope to be back on the bike as soon as possible.”

“Davi’s injury still needs time to heal properly,” McCarty added. “And we don’t want to risk making the situation worse by having him start the season when he is not completely ready. So, Justin Barcia has been contracted to race for what we anticipate will be the first six Monster Energy Supercross rounds. Anything beyond that is still dependent on Davi’s condition, and his fitness to race.”

Commenting on his return to Yamaha, Justin said, “First of all, I wish Davi well in his recovery. This is a great opportunity for me, and I’m really happy to be back with Yamaha again, and especially to be racing for the Yamaha Factory team. I’m proud to have my number 51 on the brand-new 2018 YZ450F, and A1 can’t come soon enough for me!”

Davi’s teammate Cooper Webb, whose left thumb was injured during practice at the Monster Energy MXGP of the USA in Jacksonville, Florida, this past September, is now healthy and getting reaquainted with his #2 YZ450F. This week, he and the team will begin preseason conditioning and testing at the Yamaha supercross track in preparation for the opening round of the Monster Energy Supercross season on January 6 at Angel Stadium of Anaheim in Anaheim, California.

“I rode last week on some outdoor tracks in Southern California, and it was awesome! My thumb didn’t give me any issues,” Cooper said. “I’ve also been working hard off the bike to be in the best possible shape I can be in, and I feel really good. The new 2018 YZ450F is an amazing bike, so I know there won’t be a whole lot of time required to get it fine-tuned for A1. It just comes down to me putting the laps in and getting up to race speed and conditioning. I will be ready for A1.”