Barcia on sixth at Oakland 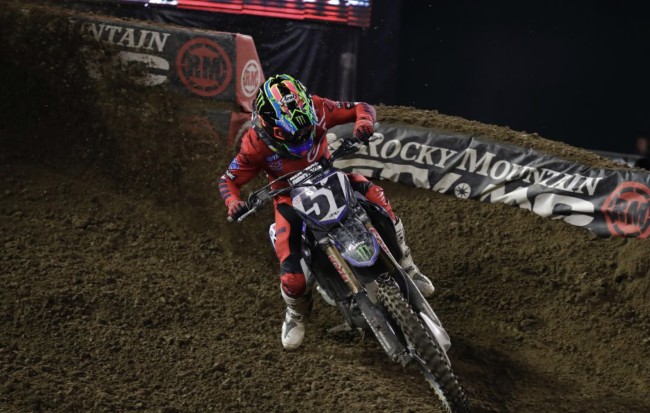 Monster Energy Yamaha Factory Racing’s Justin Barcia rallied back from a tough night to finish sixth at the RingCentral Coliseum in Oakland, California. His teammate Aaron Plessinger struggled on the tight, technical track but managed a 12th-place finish at round five of the Monster Energy AMA Supercross Championship.

Barcia got a decent start in his Heat race and quickly moved up into third. In the final moments of the race, a technical issue sidelined the 24-year-old and had the crew working hard to get the bike ready to go for the LCQ. He lined up and got into the lead early to take a dominant win and transfer into the Main Event. Unfortunately, though, an outside gate pick put Barcia at a disadvantage on the start and he found himself mid pack. He put his head down and was quickly able to work his way from 15th to 11th. He then steadily worked his way through the pack, but unfortunately ran out of time and had to settle for sixth. In the end, his efforts did not go to waste and he was able to minimize the points loss in the title chase and hold onto third in the standings, trailing the leader by 15 points.

As for Plessinger, he got a good start in the Heat race in second, but the sophomore Supercross rider struggled and was shuffled back to fourth. In the Main Event, he found himself in a similar spot as his teammate on the start and tucked in behind him in 12th. Trying to work his way forward, the 2018 250SX West Champion lost a couple positions but was able to get back to 12th at the finish.

Next up is Round 6 of the Monster Energy AMA Supercross Championship at the Petco Park in San Diego, California on Saturday, February 8.

Jim Perry
Monster Energy Yamaha Factory Racing Team Manager
“Today in Oakland, it was a difficult and challenging day for the Monster Energy Yamaha Factory Racing Team. Qualifying went well with both guys putting in some solid laps. In the Heat race, Justin had a mechanical that eliminated him from a qualifying position, but the team really came together like a fine oiled machine and got the engine changed in time for the LCQ. Justin started towards the front, quickly got into the lead and won the LCQ.

“However, that put him on the outside gate pick in the Main Event and an outside position on the start was definitely a disadvantage and put us in the back. Justin rode strong all moto long. He came from outside the top 15 to finish sixth, and maybe with a couple more laps he would’ve been able to close in to round out the top five. He put in a great ride. It was a great team effort all around with the engine swap.

“Aaron was behind all day, but he got a good start in his Heat which seemed to be a sign of good things to come, however, he would end up fourth. In the Main he started mid pack with Justin and was never able to find the comfort to move forward. When we look back at the day it seemed like we could have challenged for a win but that was not the case. Justin was riding well and will head to SD with some momentum and fight for another win.”

Justin Barcia
Monster Energy Yamaha Factory Racing Team
“We had an extremely solid week. We tested a lot on the bike. We had some work to do, but on Thursday I felt like I was in a really comfortable position coming into Oakland. Throughout practice all day we improved, and I felt the comfort kind of come, and that was a good feeling for me. I got off the start good in the Heat race, I was about third or fourth and then someone ran into the side of me and kind of set me back a little bit. Then I had to charge up to third and was really close to second and first, but unfortunately, we had a mechanical issue on the last lap, so that sent us to the LCQ.

“The LCQ win was a good confidence boost going into the Main Event. The only tough thing was we were on the far outside gate and for the start this weekend, we needed to be on the inside. I kind of got pinched off and I knew I had my work cut out for me, but my body felt super good. My fitness was awesome. I charged hard throughout the whole Main Event. I came from outside the top 10 up to sixth and was closing in on the guys in front of me. All in all, Oakland for me was not the result I wanted but my riding was awesome. I felt really comfortable on a track that was difficult. I’m really looking forward to next weekend.”

Aaron Plessinger
Monster Energy Yamaha Factory Racing Team
“Oakland wasn’t really an ideal night. I struggled all day trying to find comfort and it showed in the Main. I got off to a mid-pack start and got passed a couple times. I started making my way through the pack but made a mistake and a couple guys got by me. I tried to just push forward from that point on and ended up 12th. We’re going to go back with the team and do some testing this week. We’ll get ready for San Diego, and I’ll try to redeem myself there.”