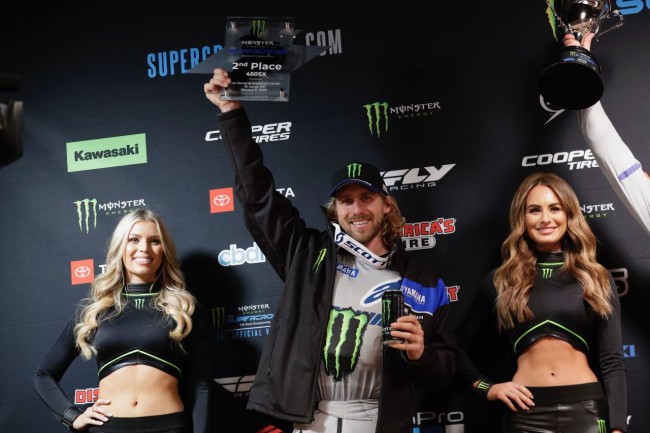 Monster Energy Yamaha Factory Racing Team’s Justin Barcia overcame obstacles to take a runner-up finish in St. Louis, Missouri, to advance his lead in the 450SX standings at the second round of the Monster Energy AMA Supercross Championship. After a tough Anaheim I, teammate Aaron Plessinger made improvements to take a top-10 finish.

Heading into the weekend, Barcia was one of the many riders in the Supercross paddock to find himself battling illness in addition to the competition. Although feeling under the weather, he was determined to hold on to his advantage in the title chase, and the coveted red plate. In addition to not feeling well, a crash earlier in the day had the team pulling together to get the bike setup back to optimum for conditions at The Dome at America’s Center. Barcia was able to rebound to qualify fifth. Although the 27-year-old got a poor start in his Heat, he pushed through to salvage a decent gate pick with a third-place finish.

In the Main Event, Barcia got a much better start and quickly worked his way into third. He didn’t waste any time advancing to second and was able to put some separation between himself and the competition while they were locked in a heated battle for third. From there on out, the Florida resident maintained a solid spot in second and scored some very valuable championship points on a day that wasn’t his best.

As for Plessinger, he put forth a solid effort to rebound from a tough beginning to his Sophomore season. Like his teammate, he also recovered from a poor start to his Heat and finished seventh. He then improved upon his 14th gate pick for the Main Event to start 11th and work his way forward to finish 10th.

Now the Monster Energy Yamaha Factory Racing Team heads back West to Southern California for Round 3 at the Angel Stadium of Anaheim, on Saturday, January 18.

““It was a great night in St. Louis, and it almost feels like a win after some early obstacles. Justin came down with a cold at the end of the week, and he was not feeling 100 percent. He was pushing through it and practice was going well until he got cross-rutted and went off track, landing on the concrete. The team worked together like a well-oiled machine and replaced parts from Justin’s crash and were able get the bike’s setup back for the tacky, rutty track. ”

““In the Heat race, both Justin and Aaron got off to a bad start, but both rode well to transfer to the Main. When the gate dropped for the Main Event, Justin started inside the top five and quickly moved to second place where he would finish, extending his points lead to six. ”

““Aaron also had a good effort after his tough start at the season opener and made improvements throughout the day. He moved up two spots from last weekend, rounding out the top 10, and he is looking to keep building on his forward progress. We’re happy with the day overall and will take the red plate to Round 3 next week at Anaheim.””

““It was a pretty tough day for me. I was really sick all week, and I just had to be mentally tough and push through the difficulties I was having today. My heat race went really well. I got a bad start, but I fought through the pack and got up to third. I made some really great passes, so that was awesome. In the Main Event, I got a much better start and quickly moved into second. I was pushing really hard, but tonight the best I had was second. I rode really well, considering. I felt like I rode better today than I did in Anaheim. I just unfortunately was a little under the weather. So, all in all, a really good day. The team did a great job with the motorcycle and setting it up. I’m really looking to get better this week and feeling better for Anaheim.””

““Today was a little bit better than last weekend. I kind of struggled in the Heat race. I didn’t get the greatest start, but I still qualified pretty good. A 14th gate pick in the Main was tough. Then, getting a bad start and trying to work my way back up into the top 10, it was really gnarly. The track conditions were pretty challenging. It was slick in some spots and really rutted. So, you had to be on your toes at all times or the track was going to take you down. It took a lot of people down, and I’m glad I wasn’t one of them. It was tough day, but we’re making progress. We’ll go back this week, put some more work in and work a little bit more on the starts and sprint laps so I can get a better gate pick. I want to try and get up on the podium or at least in the top five.”