Barcia and Plessinger on Glendale 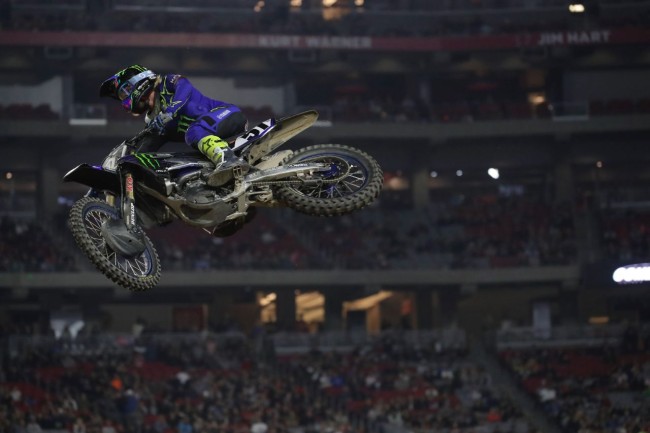 In the first Main Event, both Monster Energy Yamaha Factory Racing Team riders got caught mid-pack at the start. Barcia was able to avoid a multi-rider pile up on the first lap and move into sixth. He then closed the gap on fifth and made a couple of moves but ultimately had to settle for sixth. Plessinger was able to make forward progress, as well, working his way up into seventh, but started struggling in the whoops section and ultimately got shuffled back to 11th.

With another shot at it in the second of the three 12-minute-plus-one lap Main Events, the newly turned 24-year-old got a great start in third while his veteran teammate was stuck around mid-pack again. Unfortunately for Plessinger, the whoops still presented a challenge and he started to lose positions. Barcia kept pushing forward and was able to pass his teammate in the final laps and finish eighth.

It was more of the same in the final Main. Barcia quickly recovered from a bad start to go from 11th to ninth while his teammate got a much better one in sixth, although he got shuffled back a few positions. On lap four he was able to pass Plessinger before the whoops and make it stick. Towards the end of the race, both riders were able to advance those positions one further after a competitor got caught out in the challenging conditions and crashed out of the race.

In the end, Barcia’s 6-8-7 tally earned him fifth overall and salvaged some valuable points in spite of the challenging format and conditions. He currently sits third in the standings, trailing the leader by 11 points with 13 rounds still remaining. As for Plessinger, the sophomore Supercross rider continued to make progress, and notched his best result of 2020 with a ninth-place overall result (11-9-8).

“Justin on the other hand suffered poor starts all night, but rode well and rounded out the top five. It’s definitely a good rebound from last weekend’s performance from both guys. It seemed like the bike was going in the right direction. We learned a couple of things today. We know what we need to work on. We’ll head to Oakland next weekend ready to challenge for a podium and get back on top.”

Justin Barcia
Monster Energy Yamaha Factory Racing Team
“It was a difficult day right off the bat. The track changed as the night went on and I struggled with turning a little bit and in the whoops, but it was the starts that really hurt me. I had to fight a lot tonight to get up to where I was able to finish, but with such short races like this, it’s difficult. The track was very one-lined, and it was very difficult to pass. Triple crowns are gnarly. Everyone’s so fast. If you don’t get a good start it’s just difficult to put yourself in a good position. There were guys flying around everywhere tonight and crashing, so I’m glad to be getting out of here healthy. I’m a smarter, more mature rider than I have been in the past, so I’ll take what I can get tonight like I did last week. It’s only round four. We’re still in a decent spot and just need to keep plugging away.”

Aaron Plessinger
Monster Energy Yamaha Factory Racing Team
“The first Triple Crown of the year, Glendale, was pretty good. I qualified 15th which wasn’t great. In the first Main I got a mid-pack start and worked up to seventh in the first half of the race, but in the second half it kind of fell apart. I started hitting the whoops bad, so yeah, we struggled a little bit in the second half. Then the second Main I got a really good start. I was running up there with the boys, but I just couldn’t figure out the whoops. I was fast everywhere except the whoops. I got another good start in the third Main, not as good as the second one, but I just charged and tried to put myself in a good position and I got a pretty good finish. Overall it’s my best finish this season. We have to go back and do some more work. I can’t wait until Oakland next week.”