Baptism of fire for Ryan Villopoto 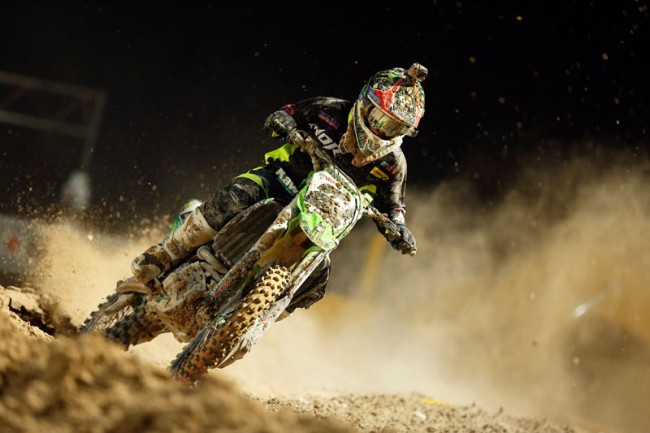 Ten times US champion Ryan Villopoto had a baptism of fire in Qatar as he finished seventh on his debut for the Monster Energy Kawasaki Racing Team in the FIM MXGP World Championship.

The 26 year old from Poulsbo in Washington State was inevitably a little race rusty after nine months without a race. He also acknowledged the difference in many aspects of the sport in the USA and on the world stage, and already displayed his commitment to tackling the challenge during the weekend in the Gulf state. After finishing on the same second as the leaders during practice, he faced a tough ride to eighth in the qualification but race day started badly when he stalled the motor at the start of the opening points moto. Despite two falls he eventually finished ninth, and advanced one further place up the scorecard in race two even though he was forced to ride the second half of the race with a damaged rear brake after a rock hit it. He will now return to Europe for some days of testing before the second round of the World Series in Thailand.

Teammate Tyla Rattray was dogged by even more bad luck throughout the weekend as crashes affected his results. The South African had twenty-second choice of gate after an incident in qualification and a crash in the opening GP moto restricted him to seventeenth. After adjustments to some bike settings he charged from twenty-first to sixteenth in race two.

Ryan Villopoto: “I haven’t raced since May last year, and it wasn’t a good day but we scored points and that’s definitively something we have to work on. I never had a schedule like that one for a long time, but I’ve got to get used to that and all the rest, including how the gate drops, how they do everything. We struggled a little bit with the start today, a little me and a little the bike, but we came back and got points. We’ve definitively some work to do, but that’s part of it. We learned a lot this weekend and will be stronger at the next GP; we have to work on setup stuff, which make thinks a little bit easier. For me every time I went on the track this weekend things went better; in the second race I had some issues as my rear brake felt strange; I don’t know if it’s a rock or what, but it’s part of the deal. We can make some stuff this week, even if the team doesn’t go back home, and we will be better next weekend.”

Tyla Rattray: “It was a tough weekend for me, for the team, for Ryan, for everyone. We’re not where we want to be; we did a lot of testing, with suspensions, we thought we had good settings coming here, but the GP tracks are much different than the US tracks and where we’ve been testing in Europe. In this case we return to the drawing Monsterboard, and do some testing; we return with Ryan to Belgium before going to Thailand, we’ll do some more testing this week and will continue to work hard. Sometimes you have to deal with the circumstances, and do the best that you can, but we’ll be ready for Thailand.”