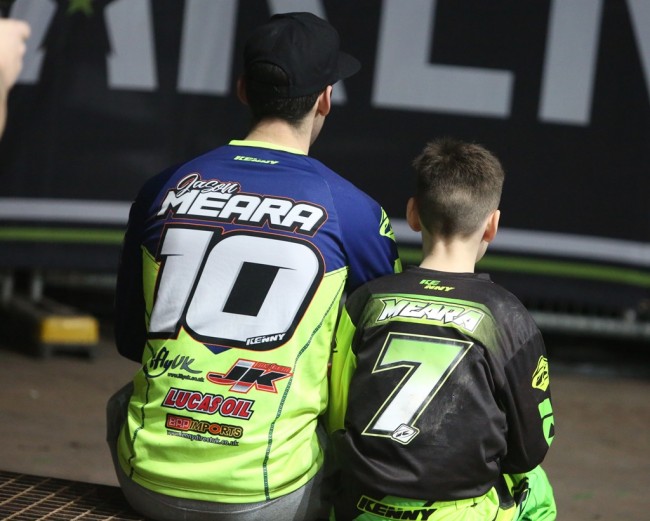 Healthy competition and camaraderie quite often go hand-in-hand, and nowhere is that more evident that at Arenacross .

The 2018 Power Maxed Arenacross Tour is unique in that it has a number of siblings contesting the various categories; whether going head-to-head in the same class, in a team, or just entering for the sheer fun of it! This is solidarity like no other …

Headline brothers must be the Bayliss guys – Matt and Chris; as well as the Greedy bros – Ash and Josh; together with Joe and Ben Clayton. Elsewhere we have Josh and Tye Jones, Cory Aldridge and Charlie Keight whilst, momentarily at Belfast, there was the Meara combo of Jason and Jack.

Despite riding in the same class, the Clayton’s haven’t yet clashed on the track – according to mum Louise, they do enough fighting at home! Joe on his Team Green Holeshot Kawsaki, has been dominant in the Pro Lites, winning 10 of the 12 races held so far. Ben hasn’t been too shabby either as, in his first year in the larger capacity group, he is currently in sixth place overall and has scored at every round. Maybe Joe should start looking over his shoulder soon ….

The Bayliss pairing run in their own Wooldridge Demolition team – with dad Dave and mum Carla, supporting them in the pits at each round. Chris is currently second in the Pro Lites class, 27 points behind leader Joe Clayton, but with 40 points on the table, he is still in with a chance of lifting the title.

Coincidentally, the third-placed Pro Lites contender has also enjoyed an AX outing with his brother. I-Fly JK Yamaha’s Jason Meara welcomed his little brother, ten-year-old Jack to the double-header at Belfast. Jack took to the circuit in the 65cc class in fine form, taking a ninth and 10th place. He also won the award for the biggest grin!

Over in the Greedy camp; both Ash and Josh ride for Team FRO Systems and it’s safe to say that Ash has, again, been the talk of AX. At the start of the 2018 Tour he appeared to be shaking off his ‘bad boy’ mantle and showed just how he’d progressed through his winter training; lean, keen and clean. His racing talent continued to shine through but there have been a few ‘incidents’ along the way. He’s holding a creditable 10th place in the championship though and can be expected to go all out this weekend at Wembley – the arena’s never boring when there’s a Greedy around!

Josh and Tye Jones, Cory Aldridge and Charlie Keight all contest the Supermini class and appear to be having a ball. When not out on the track or chatting and joking with their racing mates, they can often be found chasing around the venues on their bikes and skateboards.