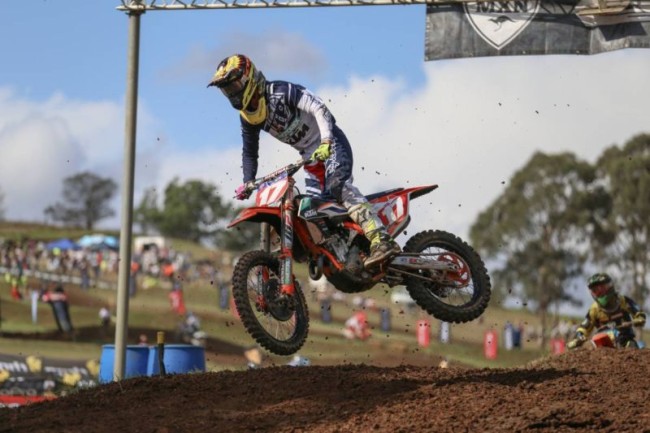 KTM Motocross Racing Team’s Caleb Ward proved to his competitors that they’re going to have to chase him down if they want to stop him running away with the 2016 Motul MX2 championship, taking his second consecutive round win at Round 2 of the Motul MX Nationals in Appin, New South Wales.

With one round up their sleeves, the Motul MX2 class were the first bikes to hit the track at Appin this morning, breaking in the well prepared circuit throughout a 15-minute qualifying session.

And when the session had wrapped up, it was no surprise to see Serco Yamaha’s Wilson Todd at the top of the time sheets with a 1:47.208 qualifying lap, ahead of red plate holder Ward (KTM Motocross Racing Team). Proformance Racing Team’s Kale Makeham managed to qualify in third position, while National Pump Monster Energy Kawasaki Racing Team’s Jake Moss wrapped up the session with fourth pick of the grid.

When bikes lined up for moto one, there were 40 riders ready to go racing in the Motul MX2 class, all vying for a moto one victory. When gates dropped, Serco Yamaha’s Todd secured the hole shot, however it wasn’t long before Moss found his way on to the number 2 machine’s rear wheel.

With two laps in the books, Todd began to check out on the Motul MX2 field, and the attention then shifted to the emerging battle for third, fourth and fifth positions, with Kyle Webster, KTM mounted Jayden Rykers, and SD3 Husqvarna’s Luke Arbon all going toe to toe.

After five laps, Todd looked completely at home out in front, while Moss began to feel the pressure from Webster for second position. Red plate holder Ward, who was all the way back in sixth place, continued to pick off the positions and fight through the pack after a poor start.

By the halfway mark in moto one, the running order saw Moss out in front, followed by Todd, Rykers, Ward, and Arbon to round out the top five. Serco Yamaha’s Wade Hunter managed to hold down sixth position, followed by DPH Motorsport’s Jed Beaton and third fastest qualifier Makeham.

With ten minutes to go, there was a change in positions once again, with Ward shocking the crowd by picking off multiple places to make his way in to second, Rykers also putting in an impressive ride to hold down third – while Todd slipped back to fourth, ahead of Husqvarna mounted Arbon.

Despite Moss’s every effort to hold on to the lead, with 12 laps in the books Ward looked simply unstoppable, making the pass and taking the top spot, forcing Moss to drop back to second place.

And when the chequered flag flew on moto one for the Motul MX2 class, KTM’s Ward celebrated his victory with a fist pump, while National Pump Monster Energy Kawasaki Racing Team’s Moss crossed the line in second, followed by youngster Rykers who held on for an impressive finish in third.

When the final race of the day for the Motul MX2 class got underway, thousands of spectators watched on, as riders prepared to go head to head for one final time at round two. And when gates had dropped, it was Moss who edged out his competitors to grab the holeshot, and moved in to the early race lead ahead of Ward, Makeham, Arbon and Crawford.

A notable absentee from the front of the pack was Serco Yamaha’s Todd, who got to a delayed start after crashing off the straight, and was forced to pull in to the mechanics are to straighten out his bike.

By the time the race had reached lap four, Ward had found his way in to the lead position and was two seconds a lap quicker than anyone else on the track. Kawasaki mounted Moss then dropped all the way back to 14th position after crashing in the ski jump section of the track.

With Moss absent from the front, the door was left open for Makeham to slot in to an impressive second place, followed by Husqvarna’s Nathan Crawford and Raceline Pirelli KTM rider Dylan Wills who has having his best ride so far this year in fourth position.

However, on lap seven, no one could have predicted what happened next, with Ward making a crucial mistake in a rut, causing him to go down, and forcing him to drop back to fourth place, allowing the likes of Makeham, Crawford and Arbon to move past in to the top three spots.

With four minutes left on the clock in the 20-minute moto, the newly positioned top five was made up by Makeham, Crawford, Arbon, Ward, and Wills. But the race was still far from over. When the last lap board was shown, Ward was able to get by the likes of Arbon to move in to third place with one lap to go.

But it was Makeham who broke through to take the moto two Motul MX2 victory at the conclusion of the race, from Crawford who wrapped up the final moto in second, while Ward fought back despite crashing earlier to secure third position.

When the points were tallied from both motos today, Ward was once again the round victor for the second time this year, while Proformance Racing Team’s Makeham collected second for the round, ahead of SD3 Husqvarna’s Arbon who finished third.

“It was actually looking like it was going to be a perfect day for me – I won the first moto, and then I was leading in the second race and I went in to a rut that had caved in and I had already committed, and I ended up going down, but we fought back and I’m stoked to be standing on the top step,” he said.

“Everyone was riding very well today, and the track was pretty crazy out there towards the end so it was good to get through with the help of KTM, and keep the red plate.

“I can’t thank the team enough, this time last year I was in a completely different position, so it’s awesome to be able to leave Appin with the round win and the championship lead, I’m stoked.”

The Motul MX Nationals will now begin preparations for round three of the championship, being held at Broadford in Victoria on May 1, 2016.

For more information on the Motul MX Nationals, and for a full list of results from round two, head towww.mxnationals.com.au