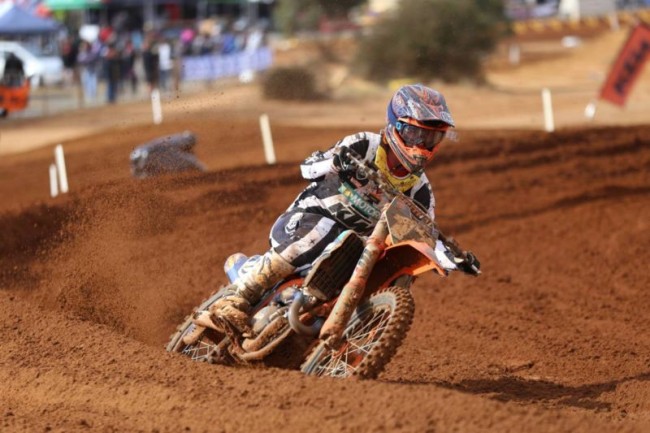 KTM Motocross Racing Team’s Caleb Ward has gone undefeated and made up crucial points in the overall Motul MX2 championship standings, at the Military appreciation round of the Motul MX Nationals at Nowra in New South Wales today.

The round which marked the first outing back after the five-week break, kick started in spectacular form this morning, with a total of 35 Motul MX2 riders all lining up to qualify ahead of the days racing kicking off.

When all competitors had put down their fastest times, it was National Pump Monster Energy Kawasaki Racing Team’s Jake Moss who secured first pick of the grid with a 1:45.391 lap time, while red plate holder Nathan Crawford (Husqvarna) and Serco Yamaha’s Wilson Todd wrapped up qualifying with the second and third fastest times respectively.

When moto one got underway for the Motul MX2 class, Raceline Pirelli KTM rider Dylan Wills showcased his local knowledge of the track, taking the MXStore holeshot and moving in to the early race lead, in what looked like it could be a repeat of his 2015 performance at the venue.

From there, Wills looked comfortable out in front, while Thomas Ravenhorst slotted in behind Wills in second, followed by DPH Motorsport’s Jed Beaton who navigated the first turn to hold down third position.

After only four laps though, Beaton and Caleb Ward (KTM) had gotten by Ravehorst and began their charge to the front. And within just a few turns, Wills’ lead was under attack from both the Yamaha and KTM machines. So when riders came around on to the straight once again, Ward had gained control of moto one and was followed by Beaton, which relegated Wills to third.

Another rider who deservingly grabbed the attention of spectators, was red plate holder Crawford, who after suffering a tough start, made a number of passes to eventually make the move on Wills to snatch up third, which was then followed by a pass on Beaton, allowing Crawford to move in to second place.

And when the chequered flag flew, positions remained completely unchanged – Ward securing his first race win for the weekend, ahead of Crawford who took second, followed by Beaton who wrapped up moto one in third.

Fourth place was taken by Davey Motorsport’s Jayden Rykers, while Wills who led race one for a handful of laps, completed the top five positions.

In moto two, it was a familiar sight as Raceline’s Wills launched off the gate once again to take his second hole shot for the day – but this time, both Ward and Beaton were hot on his tail from the get go.

Unfortunately, it only took a matter of two laps for Wills to have a fight on his hands that he didn’t want – with Ward, Beaton and Serco Yamaha’s Wilson Todd all eyeing the KTM riders’ rear wheel. But in what was a shock to spectators it was Todd who managed to edge his way past Beaton, Wills, and Ward to move in to the race lead aboard his Serco Yamaha machine.

From there, Wills was forced out of the equation all together, and by the half way point in moto two, Todd continued to lead from hard charging duo Ward and Beaton. A notable absentee from the lead pack was Crawford who once again suffered a poor start, forcing the red plate holder to claw away at positions in order to make up time.

As moto two reached its final stages, the fight for the lead was not yet over, and before long KTM mounted Ward made his way by Todd to take the top spot, while Beaton continued in third position, followed by Rykers in fourth.

With Ward out in front again, the talented rider was well and truly in the box seat to go undefeated at Nowra, so when he crossed the finish line for the final time, the northern Queenslander had plenty of reason to celebrate – Ward taking his second race win of the day from Todd, while Beaton wrapped up the final MX2 race in a consistent third position.

With wins in both motos, and a flawless scorecard, Ward was handed the overall win at Nowra today, while DPH Motorsport’s Beaton concluded the round in second place, followed by Crawford who took third step on the Motul MX2 podium and retained the championship lead by nine points.

“It was a really good day for me today. I had a bit of a tough round at Nowra last year, and the goal was to come and fix everything I did wrong last time, and I think we’ve done that,” he said.

“I’m just trying to do everything I can to get that red plate back. I had a really good mid-season break and to go 1,1 today and make up some good points in the championship is awesome.

“I want to prove that I’m the best guy in the class – I want to go to Des Nations, and I want to win this championship, so days like this really help.

“From here on out, I’ll be going out every race to do my best and I’ve just got to keep winning races.”

For more information on the Motul MX Nationals, and for a full list of results from round six, head towww.mxnationals.com.au