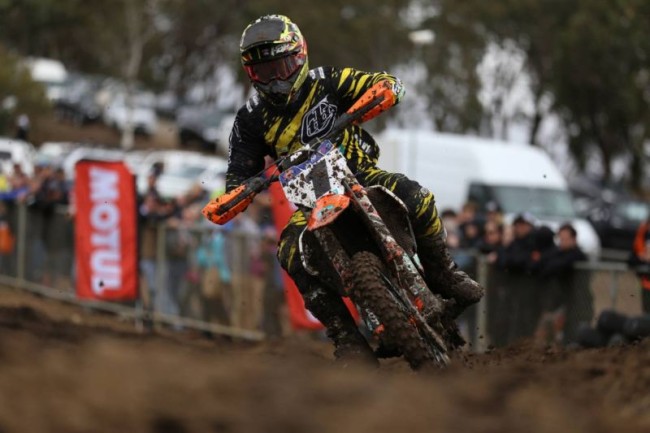 Broadford’s rich history was added to today, with KTM Motocross Racing Team’s defending MX1 Champion Kirk Gibbs racing to his first round win for 2016, at the State Motorcycling Complex for round three of the Motul MX Nationals at Broadford in Victoria.

After a wild night of storms at the venue, leaving the track drenched, both qualifying and GoPro Superpole were removed from the program for the Thor MX1 class this morning, with qualifying positions for racing decided based on championship status.

With round three clearly dishing out the toughest track conditions so far this year, when racing kicked off, no one could pin point who would be able to handle the challenge. But when gates dropped on moto one, it was Wilson Coolair Motul Factory Suzuki’s Todd Waters who secured the all important MXstore holeshot, followed by Kirk Gibbs (KTM), NPE Monster Energy Kawasaki Racing Team’s Kade Mosig and Crankt Protein Honda Racing Team’s Jay Wilson.

Only two laps in, both of the Queensland based riders Waters and Gibbs proved that they were a league above the rest – the pair checking out on the talent stacked field, allowing the battles for remaining positions to happen behind them.

And the battles were thick and fierce to say the least – after only five minutes, Kawasaki duo Mosig and Moss found each other on the track, and then went head to head for third position – and after less than one lap, Moss got the job done and moved in to third behind Gibbs.

Honda mounted Wilson, and CDR Yamaha’s Ferris then also banged bars for fifth place, and although Ferris applied significant pressure, Wilson showed maturity holding off the points leader, and by lap seven Ferris had made a small mistake and dropped off the pace slightly.

By the time the Thor MX1 class had reached the halfway mark in moto one, the running order saw Waters continuing to lead completely unchallenged, followed by Gibbs, Moss, Mosig and Wilson. CDR Yamaha’s Ferris remained in a healthy sixth position in tough conditions, followed by his teammate Daniel Reardon, and American based Brett Metcalfe.

With the 450 machines getting heavier and heavier as the race went on in the muddy conditions, it was a survival of the fittest, and with a championship on his mind, Ferris secured a pass on Wilson for fifth position and began to eye off Mosig with only a few laps remaining.

From there, Ferris continued on an impressive charge, and by the time the last lap board was shown, the Thor MX1 points leader had moved past the likes of Mosig to slot in to fourth place.

But when the chequered flag flew it was Suzuki mounted Waters who had plenty of reason to celebrate, taking the opening race win, ahead of Gibbs in second, while NPE Monster Energy Kawasaki Racing Team’s Moss wrapped up the opening moto in third.

In the second moto, Ferris was out to show exactly why he’s the MX1 red plate holder, and after only one lap Ferris moved in to a comfortable race lead, ahead of NPE Monster Energy Kawasaki Racing Team’s Moss, while KTM’s Gibbs slotted in to third.

Unfortunately for Kawasaki mounted Mosig, a nasty crash on lap two marked an early end to his day – the former Victorian leaving the track in the hands of Racesafe in a serious but stable condition.

However, with the likes of Waters and Metcalfe only seconds behind the front running five, positions didn’t remain the same for long. Waters who proved he was determined to gain an overall podium result, charged past the likes of Reardon and Long to move in to fourth position.

From there, the battles on track heated up even further, with Gibbs managing to get by Moss to secure second place, while Ferris continued to dominate in a spectacular fashion out in front.

By the time the chequered flag flew for the final time for the Thor MX1 class at Broadford today, it was the perfect ending for CDR Yamaha’s Ferris, who crossed the finish line taking a commanding race win ahead of Gibbs, while Moss managed to just hold off a hard charging Waters to wrap up the final moto in third.

However, when the points were tallied, it was KTM Motocross Racing Team’s Gibbs’ who’s two second place finishes awarded him his first round victory for 2016, while Ferris settled for second at round three, followed by Waters who despite finishing on equal points to Ferris was handed third due to a countback.

“I’m so stoked to get the overall win – I’ve been there nearly every round but to finally get a round win is awesome,” he said.

“I’m only one point off the championship lead now and obviously myself, Todd, and Dean have established ourselves in the class, and hopefully we can keep these battles rolling every weekend.

“I haven’t had a moto win yet but I’m sure it’s close, so I’m just going to keep on chasing it.

“After my injury last year it feels even better to be up here – Everyone really thought it was just going to be Todd and Dean battling this year, but I’m stoked to be up there with them battling every weekend.”

The Motul MX Nationals will now begin preparations for round four of the championship, being held at Murray Bridge on May 22, 2016.

For more information on the Motul MX Nationals, and for a full list of results from round three, head towww.mxnationals.com.au