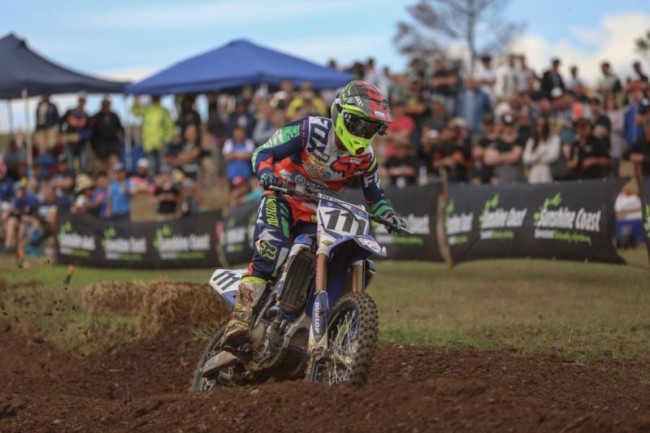 CDR Yamaha rider Dean Ferris has raced to a round six win by the narrowest of margins, edging out local favourite Matt Moss at the official Military round of the Motul MX Nationals, at the Nowra Motoplex in New South Wales today.

With round six kicking off in close to perfect conditions, the premier Thor MX1 class had their first hit out since returning from the mid-season break today, with spectators treated to Australia’s fastest riders going head to head.

In what was a disappointing blow for series points leader Kirk Gibbs, the number one KTM rider was unable to finish this morning’s qualifying session, forced to enter the pits assisted by Racesafe.

With Royal Australian Navy Personnel forming a guard of honour ahead of race one, spectators watched on as the Australian anthem played, setting the scene for an action packed first race of the day.

Despite problems in qualifying this morning, KTM Motocross Racing Team’s Gibbs, not only lined up for race one, but secured the first MXStore holeshot before moving in to the early race lead. Followed closely behind Gibbs was local Nowra rider Moss, who managed to capitalize on the home crowd support by applying the pressure on Gibbs for the lead – and by lap three it was Moss who had gained control of moto one.

With Moss out in front, Gibbs slid back to second place, followed by Ferris who maintained third. Mosig and Wilson Coolair Motul Factory Suzuki rider Todd Waters were locked in to their own battle for fourth position, just a bikes length back from the lead group.

With ten minutes run, Moss had stretched out his lead to a commanding four seconds, leaving Gibbs, Ferris, Waters, and Mosig to battle for the remaining top spots behind him. And battle they did. By the time riders reached lap nine, spectators were treated to a three-way battle for second position, with Ferris, Gibbs and Waters all exiting turn one bar to bar – but it was Ferris who made the pass stick, moving in to second place followed by Waters, while Gibbs went down however recovered to resume in fifth behind Mosig.

As moto one reached its final stages, there was little change to the race order – Moss continuing to look comfortable out in front, while Ferris and Waters occupied second and third positions respectively.

And when the chequered flag flew, Moss’s dominating form saw him awarded with the moto one win, followed by Ferris and Mosig who wrapped up race one in second and third places respectively.

Gibbs concluded the first race of the day in fourth place, while Waters who had battled for a podium position throughout the moto, finished in fifth after what appeared to be bike issues on the last two laps. Crankt Protein Honda Racing Team’s Jay Wilson finished in sixth, followed by DPH Motorsport’s Jacob Wright (7th) and Long who finished in eighth.

In moto two, Moss wasted no time in getting to the race lead, taking the second MX1 holeshot for the day – but when riders headed on to their second lap, it was Ferris who had taken control from Moss, followed by Gibbs in third position.

With vital championship points up for grabs, Moss was not prepared to go down without a fight – and with only one more lap in the books, Moss had snatched back the race lead, setting up the final moto as dash to the finish line.

After five laps, Moss began to stretch out his gap on Ferris, allowing the Kawasaki rider some much needed breathing space. And by the half way point in the race, there had been no change to the top three positions, Moss continuing to lead from Ferris, followed by Gibbs in third. Suzuki mounted Waters held down fourth position, followed by Long (Honda) who completed the top five standings.

As moto two for the Thor MX1 class reached its closing stages, riders had settled in to their respective positions – but it was the fairy tale ending that was being set up by Moss, which kept the crowd’s eyes firmly fixed on the tough Nowra circuit.

But just when spectators thought their local star had the race all wrapped up, a small crash on the second last lap handed the lead to Ferris – Moss then forced to chase down the CDR Yamaha rider if he was to go undefeated.

Despite every effort from Moss, time simply ran out, and when the chequered flag flew for the final time, it was Ferris who took the final race win for the day by the narrowest of margins, while Moss was forced to settle for second position. Gibbs concluded the final moto of the day in third, followed by Waters and Long who completed the top five.

When points were tallied, despite Ferris and Moss finishing equal on 67 points, Ferris’ win in the final race of the day saw him awarded with the round six overall win on a countback, while National Pump Monster Energy Kawasaki’s Moss wrapped up the day in second, and Gibbs concluded the round in third overall. Gibbs now holds on to the red plate by 15 points.

“It feels good to get the win here at Nowra. There’s been six rounds and I’ve only won two of them so it’s a solid result,” he said.

“It’s my goal to win every weekend, but even halfway through that final race I thought I might have to settle for second, but Mossy (Matt) crashed and handed it to me so I’ll take the win – I’m stoked.

“After Wanneroo I was a bit battered and bruised and it took a couple of weeks to get back to 100 per cent but I had a solid break and did a lot of training and riding so I’m back to where I was.

“The championship is always in the back of your mind but I just need to take it one race at a time, chip away at it, and make sure I’m strong and solid every moto from here on out.”

For more information on the Motul MX Nationals, and for a full list of results from round six, head towww.mxnationals.com.au