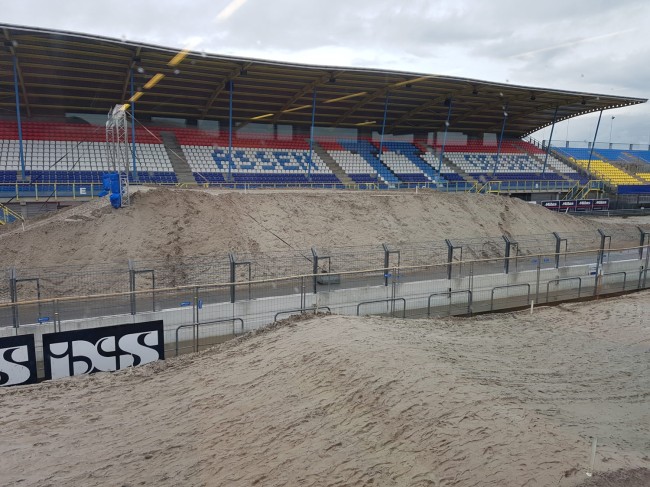 It’s hard not to be impressed by the facility at Assen.

Getting a glimpse of the grandstands on the motorway builds the anticipation, then as you drive along the road leading the legendary circuit, you are hit with the sheer vastness and size of the place.

The pillars of each bridge you drive under en-route are adorned with the number 46, spray-painted on by adoring fans. The history hits and the anticipation increases as you drive around the perimeter of the facility to the car park with the grandstands in full view.

You know this where battles have been lost and won, champions exalted and heroes created. The aura of the past seem to envelope the complex at all times.

The underpass, aptly named, “road to glory” has all the MotoGP winners from racing began there, with space for the next generation of winner right up to 2034.

But we weren’t here for MotoGP, this was MXGP, the dirt-biking equivalent was taking over the asphalt with sand for one weekend only. Bringing it’s own heroes and with it’s own Italian legend, Tony Cairoli, who would be crowned MXGP champion again.

But does it work motocross? Of course. The grandstands provide a supercross atmosphere as the riders fly past but you still retain the grit. speed and bumps that only motocross can bring. It’s a hybrid feel. The atmosphere, the buildings, it feels like an event, but the rough brutal sand track is still there bringing an old school challenge to the riders.

For a fan, it is a very impressive GP, placed in the history of MotoGP, a facility that is bringing motocross to a new audience.

The riders are all in agreement that the facility is superb although not all are fans of track, or more specifically the tarmac areas that can provide a painful landing sport if you make a big mistake and run off the track.

But when all is said and done, the event is superb and it gives MXGP a window of opportunity to get more mainstream coverage like was provided in the Dutch media over the weekend.

And not only do you get to see some MXGP, you get to visit one of the most legendary motorcycling facilities in the world.