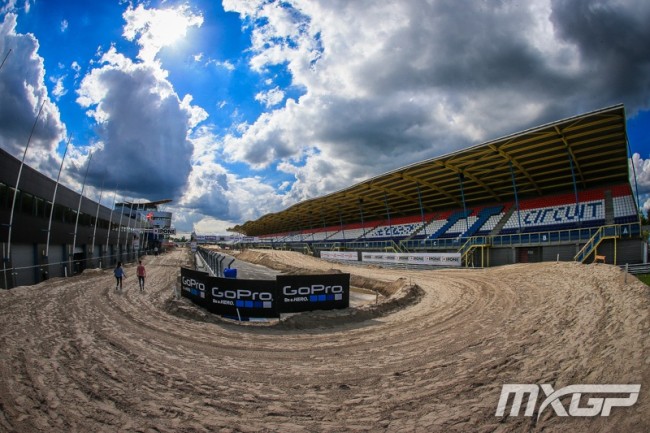 We are at Assen for the sixteenth GP of the season and the last GP of the year that will take place in Europe. The track seems to be splitting opinion within the podium but there is no doubt that it has provided some great racing for the fans.

The crowd in the Assen grandstand erupted what they seen that Davy Pooetes managed to take the hole shot in front of his home crowd! To the crowd’s delight he was pulling away from second place rider, Harri Kullas. Unfortunately disaster struck for the Dutchman as he crashed but still managed to pick up a respectable tenth place finish.

While Harri Kullas was quietly checking out at the front it was all going on behind him! Max Anstie and Pauls Jonass had a great battle – Jonass was very aggressive when making a move. Pauls should be careful as he doesn’t want to make any enemies. Max was able to get the better though and ended up second behind Kullas who managed to win his first qualifying heat, it was an impressive showing. Will he be able to win his first ever GP tomorrow?

Ben Watson managed to impress as he got a great start and looked comfortable in third until a crash cost him but it’s good to see he has the speed, he could be brilliant if he got the opportunity in a factory team. An eleventh place finish is still encouraging for the Brit, let’s hope he can better the result tomorrow with two top tens.

Jeremy Seewer got a good start but wasn’t riding like his usual self as he ended up in seventh, I am sure the Swissman won’t be best pleased with that and will hope to improve for tomorrow.

Brent Van Doninck, Thomas Covington and Brian Bogers all had brilliant rides as they finished fourth fifth and sixth. Brent certainly doing himself no harm in getting picked to ride the Motocross of Nations for Belgium.

It wasn’t the best moto for Tim Gajser – is he struggling with the pressure? Does he need to improve his sand riding? Was he saving himself for tomorrow? Tim certainly won’t be pleased and the last thing he wants to do is give any more confidence to Jonass in the title race!

Whenever Glenn Coldenhoff took the holeshot in the MXGP race the crowd went nuts! Two holeshots for the Dutch boys gave the crowd something to cheer about. Glenn had a bit of pressure in the early stages of the race from Gautier Paulin and Jeremy Van Horebeek, was he able to hold on? He certainly did, he looked so smooth and controlled the race from out in front. It looks as though Suzuki have made a massive mistake to let him go for 2016, maybe they should have believed in him instead of showing him the door.

Jeremy Van Horebeek made an early mistake which meant Gautier Paulin got past him and for most the moto JVH huff and puffed to get past the Frenchman and he was finally able to do it. It was a good moto for the Belgian, he is starting to look more like his old self.

Gautier Paulin was able to hold off a fast Romain Febvre to finish third – Gautier will be looking to find more speed for tomorrow as he has had a lot of success at the sand GP’s in 2016. Febvre had a bad start and worked his way up past Simpson and Bobby to get third.

At one stage in the race there was a five rider battle all going for second, Tyla Rattray was even involved! Where did Tyla get that speed from? He has been struggling all year but he had a great moto and finished seventh, he did drop off later in the moto but encouraging none the less.

Brit, Nathan Watson deserves a mention as he made some good passes to end up tenth overall. He will hope tomorrow is the day were he can take his qualifying speed to the main race day and put two solid results in!

Max Nagl ended up in thirteen, it looked as though the German didn’t want to take too many risks on a gnarly track, don’t be surprised if we see a different Max Nagl tomorrow though!

Belgian, Jeremy Delince deserve a mention as it is only his second GP this weekend. He showed good speed and finished the race in 14th just behind Nagl. His team mate, Stuart Edmonds ended up in 21th, he will be hoping to get two races in the points tomorrow.

There is one thing for sure though, the top five or six riders in the class all have the speed to win so don’t be too shocked to see any of them win the GP tomorrow – a bit of overnight rain could even make it more interesting!