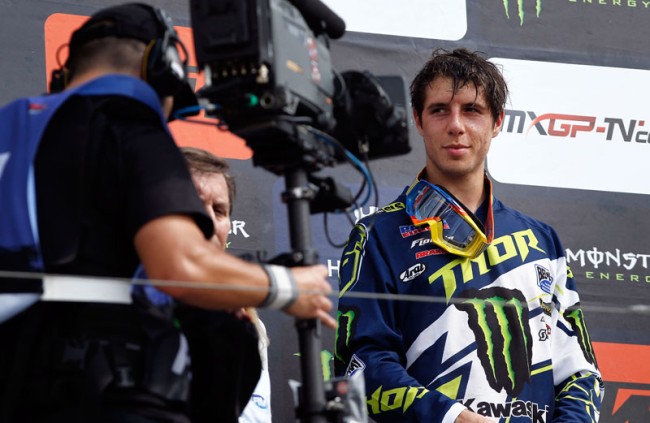 It has been a long 18 months for Arnaud Tonus. His American dream has become a nightmare with his talents and potential being significantly blunted by illness and injury.

But now with just five rounds left of his second season Tonus is finally starting to show what he can do as his health improves. Sixth at Red But was encouraging and, after his first good start of the year, he got a third in the first moto at Southwick and was on for a podium overall until he crashed with a backmarker with two laps to go in moto two.

Tonus had finally put two good motos together and showed not only to America, but probably more importantly, MXGP teams, that he still had the stuff to run at the front.

Speaking to Racer X after the race Tonus admitted: “From now I seem like I have a better momentum so I’ll try to carry it and keep working and build my physical condition too. I felt today I was a lot better. I could push until the end.”

The fact that Tonus still isn’t at 100% is encouraging, he is showing top five speed and probably is the only rider with the raw talent to run with Webb and Martin week-in, week-out if his fitness and confidence was at 100%. Tonus is that good on the bike, but mentally and physically he has never been able to show his full potential except for the odd inspiring moto here and there.

You just need to look how fast Tonus can go when he ran with Herlings in 2014 for a couple of races on hard pack. The guys has the stuff but his decision to go to America has nearly ruined his career. Right now Tonus is fighting to save his career and get a move back to MXGP, but he needs more results like Southwick to encourage the factory teams to hire him.

At the end of 2013 Tonus reportedly had an offer from factory Honda in MXGP for more money than he was going to get at PC Kawasaki. But Tonus had his head turned by America and said no to Honda. When you look at where that team is now and just how well Tonus’ style should suit a 450, you have to wonder what might have been for the Swiss rider.

Yes Tonus has shown he has the technical ability to ride supercross, his laptimes are good but the intensity and aggression in the races seem be more difficult for the silky smooth rider to adapt too. Even in outdoors the size of the guy seems to hamper his ability to get good starts. Tonus has the talent to succeed there but it looks like he may have went a couple of years too late to really succeed at supercross.

And the reality is US teams only care about supercross, if you can’t show potential in that you will struggle to get a ride. That leaves Tonus struggling in America, and with most of the rides taken for the factory MXGP teams, it slim pickings already for 2017 in MXGP but he has one ray of hope – Suzuki MXGP.

It might just be the perfect arrangement, Tonus rides smooth like Everts and Stefan needs a rider who has the talent to run top five, which Tonus has. Everts could also help Tonus’ mentality and if it clicks it could be an inspired signing.

According to our friends at crossxl.nl Everts is now considering Tonus for next season, but it could be a choice between the Swiss and the Belgian Kevin Strijbos.

Tonus, just in time, has come back to form and reminded everyone of his ability. It has been hard to see the guy struggle so much in the USA, but the next few weeks will hopefully see Tonus get the results he is capable of and get himself on a 450 and back in factory MXGP teams where he belongs.

And that Swiss team might be pretty decent in September too (and give us a glimpse in Tonus MXGP potential)… Tonus and Guillod on 450 plus Seewer on a 250!