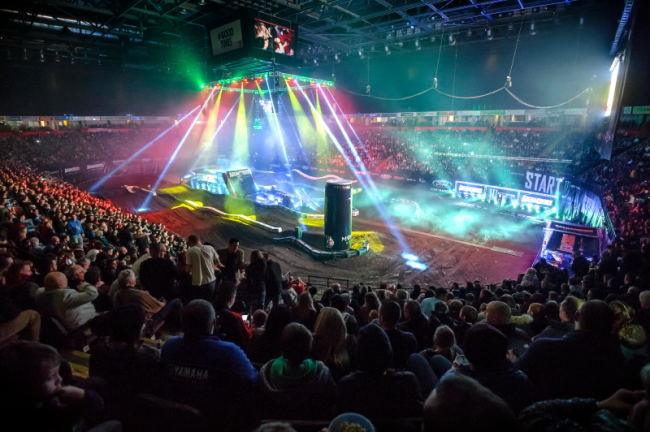 The 2018 Arenacross World Tour is just weeks away from bursting into of the UK’s biggest concert venues and is now complete with a line-up of racing superstars so huge that it warrants the title ‘Year of the Champions’.

Europe’s fastest growing indoor series comes back stronger than ever, and for the first time, AX expands outside of the UK taking the tour around the globe.

Hosting the fastest home-grown and international two-wheeled talent, all of whom will have their eyes set on the richest indoor MX race series Europe has to offer. It’s all or nothing once the gate drops and now Arenacross can reveal the athletes and their teams taking part in 2018. This is the hottest line-up to ever take to the dirt playground that is AX and boasts championship winners, national Supercross champions and pure veterans of the sports are all included alongside some of the most talented youngsters.

Three time Arenacross Pro Champion Thomas Ramette makes a very welcome return with his team SR75 World Suzuki, ensuring he’s backed with all the best tools to once again thwart any challengers to his AX crown. Riding alongside him is fellow Frenchman and friend Cyrille Coulon – who has proved in previous years that whilst his number one aim is to win, he’s more than happy to comply with team comradery.

Alongside the riders Championships, AX also runs the team Championship and it wouldn’t be right if the 2017 Team Champions weren’t returning. Off the back of last years winning ways, Race FX are back to try and claim the title once again and they’ve stuck with one of their hottest performing riders. Angelo Pellegrini, who previously took the win in both the European Supercross and Italian Supercross in the same year, impressively finished in second place, just behind Thomas Ramette in the 2017 AX Championship – his team-mate has yet to be confirmed.

Team FRO Systems are back with possibly the most controversial team in Arenacross history. Not only have they got the AX ‘Badboy’ Ashley Greedy signed up for the second year running, but they’ve also got Cedric Soubeyras, French and European Supercross Champion and indoor specialist running with them. Soubeyras is an incredibly skilled rider with a very ‘up close and personal’ riding style, which in the past has resulted in some showdowns both on –track and in the pits – one to watch!

The year of the Champions continues as the 2014 Pro Champ also makes his return after a year off AX. Fabien Iziord, who also happens to have 2 European Supercross titles and three French Supercross Championships under his belt, is at the heart of many legendary AX tales and will be heading up the Buildbase Honda team in 2018. Though the rider who will join him is once again yet to be confirmed.

With the strongest British line-up ever seen at Arenacross, there are no less than two teams fully flying the UK flag. Team Green Kawasaki brings with them two AX veterans who have been racing the series for longer than many young AX fans have been alive! Jack Brunell and Adam Chatfield, both featuring many indoor Championship wins on their CV’s, may be best mates off the track but when it comes to racing, the competition is in full flow.

Wooldridge Demolition Honda have put forward two riders who bring more than just youthful zest to proceedings. Surprising many Pro riders in previous years with his skill-full riding, Matt Bayliss (carpenter by day and indoor Motocross ace by night) has proven that his winning aspirations are to be taken seriously. Teamed up alongside Jake Millward, who raced the Pro Lites class three years ago, there’s no doubt this team will be iconic for a lot of young AX fans.

For 2018 MVR-D Husqvarna are stepping up their level of involvement in the AX series – a testament to just how important this competition has become. Entering two teams this year, the first is an international force to be reckoned with, featuring Frenchman Adrien Escoffier and non-other than former German Motocross Champion Nique Thury. Thury will no-doubt be looking forward to battling on home turf when the Tour hits the ESPRIT Arena in Dusseldorf on the 10th March for the AX World Finals. Forming the second team for MVR-D is AX regular Jordan Booker, riding alongside former Finnish Supercross Champion who not only represents both Estonia and Finland but also lives in Belgium!

Two time British Motocross Champion Elliott Banks-Browne returns indoors with his very own team Geartec Husqvarna. The top talent set to join him is yet to be announced but there’s no doubting that Elliott will ensure whoever joins will assist in his bid to take the Brits first AX Championship.

JK Yamaha will once again field a team, however on this occasion, they’re pairing up new talent with a four time German Motocross Champion. Yannis Irsuiti, who only last year took the win in the AX Rookies Pro Lite class, teams up with fellow Frenchman Florent Richier – who has proved himself a serious contender both indoors and outdoors.

Finally, and perhaps one of the most interesting twists in the AX UK team setup for 2018, is the return of the 2-stroke with GL12 KTM. Taking on the PRO class as the only team running 2-stokes on the AX Tour are James Dunn and Dutchman Mike Kras.

The AX Tour starts in Manchester at the Manchester Arena on Saturday 6th January. Book your seat.