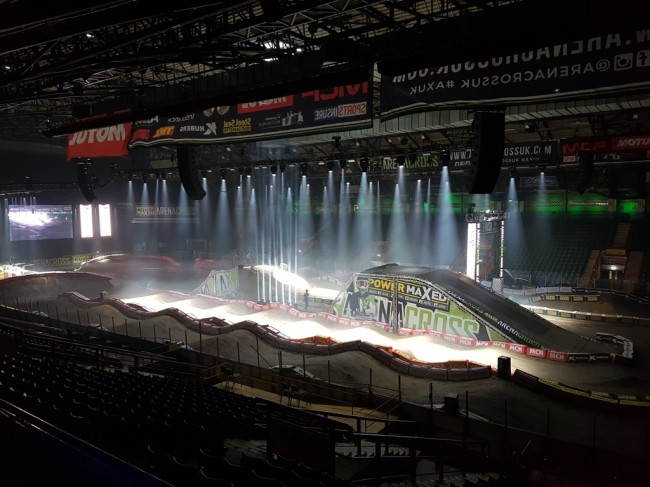 Heading into the main event there were four different winners of the heat races just to show how competitive the UKAX series is. One of them wasn’t even last weeks winner Charles Lefrancois as he wasn’t quite looking as good as last week.

The Frenchies were looking good as usual as the winners of the heats were Soubeyras, Coulon, Izoird and Ramette.

It was Cedric Soubeyras who put in the quickest lap during the hot lap which will have helped his confidence before going into the main event.

In the head-to-head LCQ it was Dan Reardon and Ashley Greedy that made it to the final and therefore the main event. Greedy came out on top over the Aussie in the LCQ final.

When the gate dropped for the main event it was the fast starting, Thomas Ramette who grabbed the holeshot. The moto was shaped up nicely with Cedric Soubeyras right in behind Ramette. Hugo Basaula also grabbed a good start and quickly found his way into third not losing much to the front two.

Disaster struck for Ramette as he tangled up with a tough-block which was clearly hampering him. After that it didn’t take Soubeyras long to find his way through. Things got worse for Ramette as he dropped it and loses tonnes of championship points as a result.

Jack Brunell again ended up the best Brit just like in round one as he finished in sixth ahead of James Dunn on his two stroke!

In the Pro lites class it was Buildbase Honda rider, Chris Bayliss who got his day off to a good start by winning the first final ahead of Joe Clayton and Jason Meara as those three look to be in a class of their own in the pro lites. Clayton had actually passed Bayliss for the lead but the red flag went out on the same lap which meant they had to go back a lap to the disappointment of the Kawasaki rider.

In the second Pro lites final, Joe Clayton grabbed the holeshot and never looked back as he led from start to finish. Meara got a good start in second but couldn’t do anything about Clayton but a second is a good result and good points for the championship. Chris Bayliss was third on the first lap but stalled it which pushed him down the pecking order, he managed to get his way back to third which was a good ride and secured second overall ahead of Meara. Scooter Webster improved in the second moto to come home in fourth ahead of Harry Kimber.

In the Supermini class it was Buster Hart who came out victorious with Shaun Mahoney coming out on top in the 65cc class.