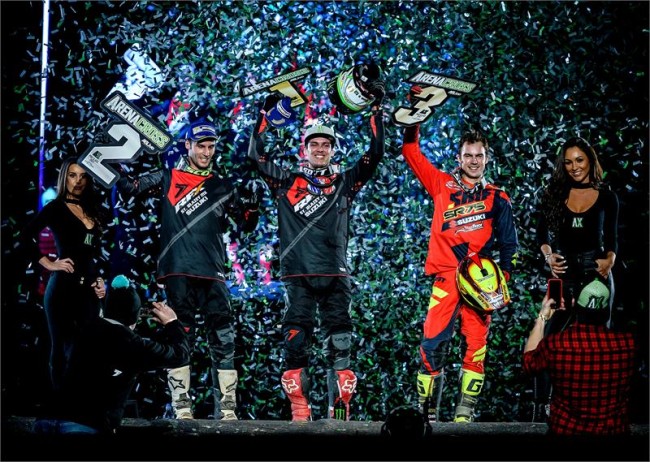 The Arenacross World Tour is putting up a series jackpot fund of over £250,000 which, outside of the US Supercross series, arguably makes it the most rewarding motocross championship on the international scene for both teams and riders alike.

With almost £60,000 of the total fund being placed directly to Pro Race teams the organiser, Arena Sports Live, is backing its theory that if a team can break-even and Pro riders can make a genuine living, Arenacross has the best two-wheeled commercial future of all concerned.

As the outdoor motocross season heads towards hibernation, plans for the 2018 Arenacross World Tour – which gets underway on Saturday the 6th of January at the Manchester Arena – are in full swing.

The appeal of Arenacross has been well-documented here in the pages of TMX; it’s multifaceted, it’s indoors and is therefore weather-proof, it’s a full-on evening of non-stop entertainment and fast-paced race action, there’s no-where else in the UK where you’ll see motocross super-heroes throw caution to the wind in such epic style, and it caters for cute and gutsy riders from the age of seven right through to not-so-cute hard-charging Pro riders from around the world. Each and every one of the AX competitors are hungry to win the coveted title in their respective classes and, for 2018, there is a massive financial incentive as the overall prize fund totals over a quarter of a million pounds.

This substantial pot of prize money will see £200,000 set aside for the Pro class contenders over the series, with an additional £60,000 reserved for the teams. Such earnings are unparalleled elsewhere in motocross, and it means the riders can actually earn a decent living in the winter months, whilst the teams can more than cover their costs of being involved with the Tour.

Twelve teams will take to the AX start line in January next year, each will comprise two 450cc Pro riders. Many regular AX head honchos have already signed up to pit their considerable team talent against the best of the best and there are several new teams on the horizon. Multi-British and World MX champ Dave Thorpe has been a strong supporter of AX and, with a competitive line-up for 2018, he’ll have his sights set on one of his Honda riders lifting the AX title and the prize money to boot. He of course won’t be alone in his team trophy quest as Mark Chamberlain of MVR-D Husqvarna, quite possibly the most popular team captain in the country right now, will field a team and, with the MXON success under his belt, he’ll be focussing on taking the AX spoils. What’s more, thanks to the stature and popularity of the AX Tour, British top runners such as Elliott Banks-Browne are signing up to take on the bevvy of international stars who view the championship as the must-do race series in Europe.

Said Chamberlain; “As a team, we really appreciate the support of the organiser as it means the more we put in, the more we get out and we can approach the championship with financial confidence. The fact that our riders have a very real opportunity to earn proper money is a bonus, and we can’t wait to get back indoors and build on the couple of wins our team enjoyed in the 2017 series.”

Clearly looking forward to the prospect of participating in AX next year, Elliott Banks-Browne said; “It’s really exciting to be returning to Arenacross. I had to miss the last couple of years, firstly due to injury and then and then because of changing manufacturer and team. This year is going to be a massive jump forward for me and with the backing and support of Husqvarna, I’m looking forward to getting some great results. I’ll be running and riding in my own Geartec team and Luke Norris will be my team-mate. Having been away from AX, it’s impressive to see how much it’s grown and really, you just can’t afford to miss it as it is such a big event, probably the biggest in Europe on the indoors circuit. It’s a must for our sponsors and team and, for riders who are struggling elsewhere in the sport in terms of money, it’s a great opportunity. Sometimes you can finish in the top ten in a world event and come away with nothing and, when you’re racing for a living, you simply have to earn money. I reckon it’s going to attract bigger and better riders, more people and eventually bigger stadiums. Matt (Bates) has huge plans for the future of AX – I want to commit to it and be a part of it for the long haul.”

Commenting on the upcoming 2018 season, Arena Sports Live CEO Matt Bates said; “We’ll be announcing the teams and riders by the end of October. I’m thrilled at the calibre of competitors and managers who have already signed and those who have expressed an interest in being involved. We’re always happy to talk to new teams and I believe they can see the benefits of being involved as we’re essentially helping both riders and teams to be financially secure and I don’t believe any other promoter can lay claim to the same.”

2018 Arenacross tickets are on sale now via www.axworldtour.com