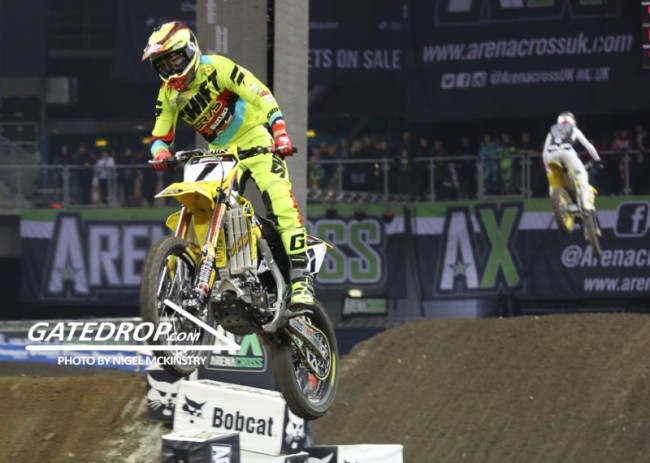 When the 2017 Arenacross Tour powers into Sheffield on Saturday the 11th of February for the penultimate leg of the Tour, expectations are set to be at an all-time high as the strongest-ever Pro and Pro Lites team line-up, packed-out youth classes and an insane bunch of FMX athletes all get ready to explode into the city’s Arena and entertain the masses. And there’s, a couple of local lads in the mix too.

There’ll be plenty to keep visitors amused, when the doors open at 6.30pm. Whether it’s checking out the latest must-have AX merchandise, grabbing a star or two to sign a poster, chilling with a hot or cold beverage, or simply soaking up the atmosphere. It’s well worth rocking up early to pack it all in before filing into the auditorium and, once there, be ready to catch a flying AX tee-shirt and bag some free goodies.

For those seeking a massive dose of adrenaline, it’s the racing that’ll give the fix. AX delivers plenty of high-octane excitement with a bevy of accomplished racing stars from around the globe taking to the start gate. It’s fierce, fast and frantic and there can only be one winner.

Never have the top six in the Pro class been separated by so few points as they get ready for the all-important round at Sheffield. There are just 12 points between first and sixth and, with two Brits in the mix, there is a very real possibility that the 2017 Arenacross crown could stay in the UK. Frenchman Cedric Soubeyras who rides for the British team RFX St Blazey MX is leading the championship by four points over his team-mate, Italian Angelo Pellegrini. Reigning AX champ Thomas Ramette (SR75 World Suzuki) is third, with two Brits – Adam Chatfield (Buildbase Honda) and Jack Brunell (Team Green Kawasaki) – in fourth and fifth. Florent Richier from France, riding for the Keystone Honda team, rounds out the top six.

Bolddog’s Arran Powley has perfected his back flip

Away from the racing line, the Freestyle guys indulge in plenty of showboating. They’ll twist, whip and flip their bodies and machines through three incredible sets. They’ll perform their aerobatics some 50’ above the track, spanning a gap between two ramps of over 20’, and without a safety net in sight. The Arenacross Tour Freestylers include the one and only banana-faced Spaniard Edgar Torronteras, uber-cool Czech Petr Pilat, super-smiley Aussie Steve Sommerfeld, high-flying back-flippin’ Jamie ‘Squibby’ Squibb, huge-side-flipping, Nez Parker and the former Britain’s Got Talent semi-finalists; Dan Whitby, Samson Eaton and Arran Powley who together make up the unique Bolddog team – when these guys get airborne, anything could happen.

Doncaster’s Harvey Shaw is aiming for a podium at Sheffield

On the local rider front, two ten-year-old cousins from Doncaster are contesting the series, and will be looking for the support of the crowd when they take to the racing arena on Saturday. Harvey Shaw was introduced to Arenacross by his cousin Kian Knowles. This is Harvey’s first year in the series and he’s getting better round-by-round. He goes to St Mary’s School in Edlington and he says they’ve been really supportive of his racing. Harvey is currently seventh in this highly-competitive class – not bad for his maiden year, and he reckons he’s aiming for a podium at the weekend to make his family and friends proud. Kian, in 11th overall, had to miss the last two rounds at Belfast, so he’ll be hoping to make up some points in front of his home crowd. Sheffield! Your boys need you …

Tickets for the Arenacross tickets are on sale now via www.arenacrossuk.com or by calling the Box Office on 0844 338 8000.