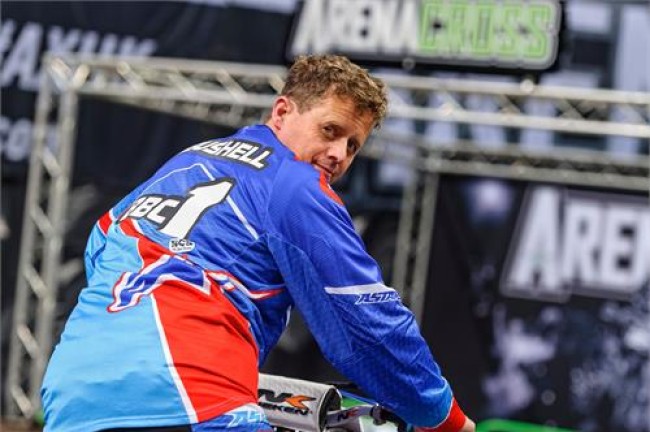 AX PR- The Pro rider team line-up is one of the strongest yet with a strong British contingent, headed by former British MX champ Kristian Whatley and the first-ever AX champ Adam Chatfield, eager to stem the French invasion and keep the trophy, and significant prize money, in the UK.

The other categories, namely, Pro Lites for riders aged 15-to-23-years, SuperMinis for 10-to-15-years and Youth 65cc 7-to-10-years all enjoy packed grids with the governing body behind the series, MC Federation, holding reserve lists for each class.

The AX team have been busy with pre-Tour promotions and have benefitted from national media coverage across television, radio, print and social media. During today’s pre-Show build-up, Mike Bushell of BBC Breakfast popped into the Manchester Arena to check out Arenacross. The intrepid sports reporter spent time interviewing a few of the AX riders prior to having a go himself and, after a little guidance, tackling one of the circuit’s famous rhythm sections aboard a I-Fly JK Yamaha 250 – now that takes some doing!

The word is that the opening round of the 2017 Arenacross Tour at Manchester is anticipated to be a capacity affair but, a few tickets are still available via the Manchester Arena on 0844 847 8000 or website www.manchester-arena.com