Arenacross Tour gears up for Belfast! 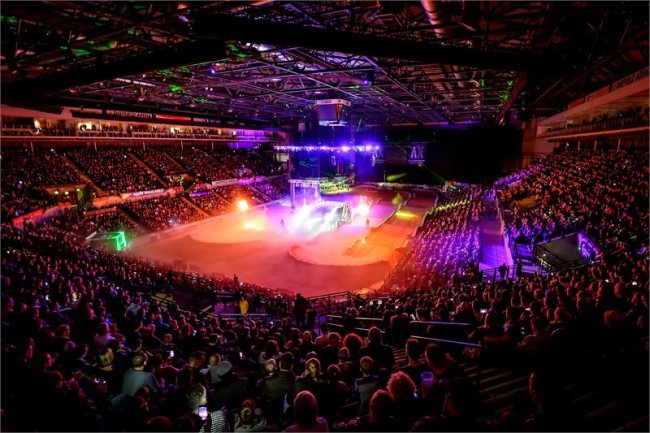 The Arenacross Tour is set to burst into 2018 with a bigger and better format for its seven-round action-packed UK indoor Motocross race series and Freestyle extravaganza – and it returns to The SSE Arena, Belfast on the 26th and 27th of January for the only double-header of the series.

AX is high-octane entertainment at its very best. It throws together an intoxicating mix of world-class indoor Motocross racing, high-flying Freestyle Motocross and a show to rival any music festival. In its five-year history, it has seen thousands of fans streaming through its doors every year.

Enthusiastic fans flocked to the Titantic Quarter when the 2017 Tour visited Belfast earlier this year. They enjoyed a night of tense race action, high-air FMX antics, lights, lasers and music. It’s no secret that the Belfast audience is the one everyone wants to perform in front of, thanks to its raucous enthusiasm and love of motorsport. And, that passionate support worked in favour of the four local lads – from Loughbrickland, Ballyclare and Newtownards – who rode their hearts out to give their best performance to the excitable, capacity crowd.

2018 promises to again deliver an electrifying Tour, and the two rounds at Belfast are gearing up to have the largest entry of Irish riders in the Tour’s history. A crammed agenda will cater for mini-racing gladiators from the age of seven – who manage to fit in school and homework around the gruelling AX races – right through to the most talented line-up of Arenacross Pro racers ever to place a wheel on UK soil.

Away from the racing line, the Freestyle MX boys never fail to impress with their electrifying, high-air whips and flips which keep the audience hollering for more. In its five-year stint, the UK Arenacross series has been revered for showcasing FMX at its very best and that’s why the big-hitters of the sport, the FMX royalty, have made the series a must-do affair and worked it into their busy schedules. When it comes to AX; X-Games gold medallists and Nitro Circus superstars abound with Spaniard Edgar Torronteras and the UK’s very own Jamie Squibb and the Bolddog Team at the fore, together with arguably the most spectacular double-flipper in the world, 6’ 4” Czech uber-cool superman, Petr Pilat.

Commenting on the growth and popularity of Arenacross, ArenaSports Live (the company behind AX) boss Matt Bates said; “I believe we have a massive future! As well as ramping up the AX experience for our UK based fans, we’re extending into Europe next year and I’m set on making sure we develop both the riders’ rewards, team support and take the entertainment of AX to a whole new level.”