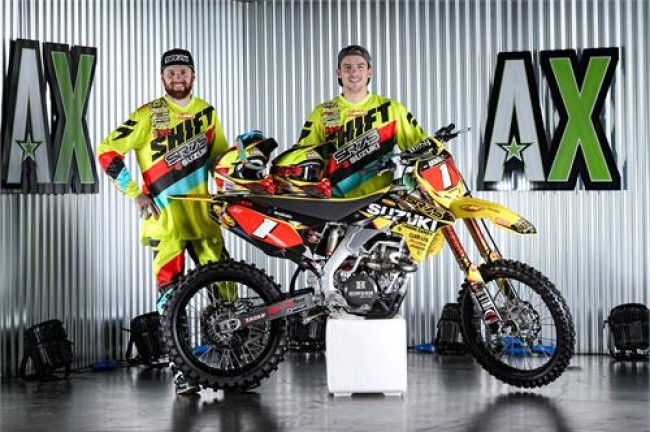 The eagerly awaited 2017 Arenacross Tour opens in Manchester on Saturday 7th January and, with only a matter of days to go until the AX insanity descends on the North West, there are still some nips and tucks being made to the Pro rider line-up. The final preparations are all falling into place though and early indications are that AX is set to be explosive in 2017.

AX is ever-evolving and, even as the riders take to the start line, there are usually some last-minute tweaks. As the country heads towards the festive season, there are a few major changes on the Pro class front that will shake things up a bit, whilst SR75 World Suzuki remains the only team to return to the 2017 Tour with the exact same team set-up as 2016.

The biggest switch in the AX transfer-window is that of the 2013 Pro champ, Adam Chatfield, returning to his solid Buildbase Honda team under the guidance of multi-World and British championship-winning MX-hero Dave Thorpe. Chatfield was set to run under the FRO Systems PAR Elite banner, whilst 2014 AX champ Fabien Izoird was due to head up the Buildbase team. When a collarbone injury, in the final rounds of the French SX championship, ruled out Izoird, Chatfield was an obvious choice to step back into the Honda-supported team.

Commenting on the changes, Thorpe said; “As a team, we are devastated for Fabien as he’s been riding for Honda in Europe and was looking forward to racing with Honda in the UK for the first time. However, we’re delighted to welcome Adam back to the fold as, personally, I’ve worked with him since he was seven-years-old. He won AX in 2013 and then, in the 2016 AX championship, he recovered from a slow start to get on the podium at the last three rounds and win the electrifying final at Wembley.

“I’m actually thrilled to have an all-British team and all three guys; Adam and the Bayliss brothers Matt and Chris, have huge potential. I reckon they will all feature on the podium. It’s an exciting time for us all and we’re particularly looking forward to showcasing the all-new Honda 450.”

Replacing Chatfield on the FRO Systems PAR Elite team is 22-year-old French hot-shot Gaetan Le Hir. He was the 2011 French Junior SX champion and since 2012 has been in the top five of the French SX Lites class – he finished third this year. Of his new team, he said; “The team looks motivated, and they are preparing me the bike that I want. It all sounds good!”

Elsewhere, Frenchman Romain Biela will partner Aussie Jay Wilson in the I-Fly JK Yamaha team. Wilson is touted to be something of a SX ace, yet hasn’t raced in the UK before. Unassuming Biela has ridden in each year of AX since 2013, but has only completed once full series in 2015, when he finished seventh overall. Team boss and MX coach Dickie Dye is sure to mould these guys into racing titans.

The other new and exciting aspect for AX 2017 is the introduction of a handful of wildcards. These guys will contest the entire series, but without the team backing of the other Pro riders. Four riders, from four different countries, will fall into this category; Stuart Edmonds, Ireland’s most revered motocross racer and multiple Irish and British champion, talented Brit youngster Gradie Featherstone, and indoor specialists Hugo Basaula from Portugal and Sulivan Jaulin from France.