Arenacross set to light up London! 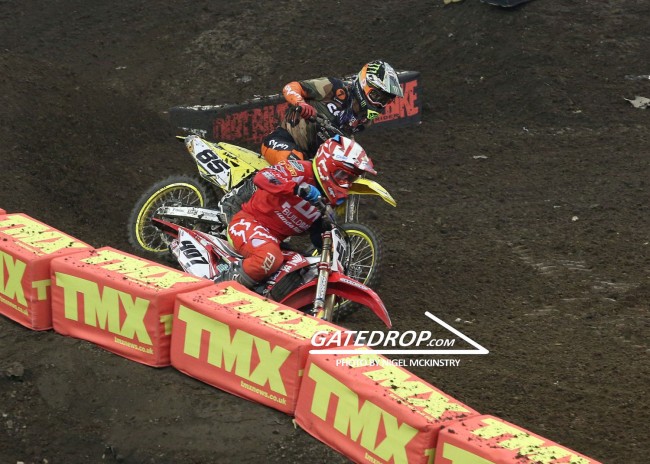 All roads lead to London this Saturday, the 18th of February, when the 2017 Arenacross Tour reaches its climax at the Wembley Arena. And, it’s going to the wire!

Those lucky souls who witnessed just what went down last year, when the gloves came off, will know what can happen when emotions run high. Anyone who missed out should quickly grab a ringside seat and buckle in as, with just 17 points separating first to fifth and 46 points up for grabs, it’s simply too close to call. What’s more, there are two Brits in that top five and they’ll want to be flying the flag high in their home city.

Here’s a quick run down on the title contenders, prior to the final battle; Red plate holder Cedric Soubeyras (RFX St Blazey) sits on 104 points, just eight ahead of team-mate Angelo Pellegrini. They’ve both tasted race win glory; the Italian Pellegrini at the Manchester opener, and Frenchman Soubeyras last weekend at Sheffield. A further point behind, and sitting right on the RFX team’s real wheel with 95 points, is the reigning champ Thomas Ramette (SR75 World Suzuki). The two-time AX Pro king is the only one of the top four not to have won a Main Event but, he has featured on the podium on several occasions.

Next up, and in with a very real chance of lifting the AX crown at Wembley, are our two British hopefuls, Adam Chatfield (Buildbase Honda) and Jack Brunell (Team Green Kawasaki) who, in fourth and fifth, are only a point apart with respective tallies of 88 and 87. Chatfield in fourth overall was given a massive boost when he won the Main Event at Belfast, and Brunell placed his Kawasaki on the podium at Birmingham.

RFX St Blazey team are the ones to watch

The next batch of candidates who could mathematically upset the AX apple cart, are the only other two Main Event winners, namely, SR75 World Suzuki’s Cyrille Coulon in sixth on 72 points and MVR-D Husqvarna’s Adrien Escoffier. Escoffier ties on 69 points with Florent Richier (Keystone Honda).

Coulon, the only rider to win two Main Events, was an early season hot tip for the championship win but, a couple of offs aggravated a pre-existing knee injury and set him back. Amazingly, the ‘old man’ of Arenacross has continued to race, when many others would have given up, and the good news is that he will be at Wembley ready to mix it with the best of them.

Never has the Pro class been so close with so many truly capable of taking the AX win. Whilst the paddock has not been quite so hostile this year, the stakes are high and it’s going to be fraught. There is still a fair way to go until the final flag falls with morning practice and qualifying followed by four evening heats, a hot lap and head-to-heads until the Main Event gets underway. It only takes one or two of the leaders to go down and then it’s anyone’s race. Controversy ruled last year – what will this year’s grand final bring? We can’t wait!

Secure your tickets now by calling the box office on 0844 338 8000 or visit www.arenacrossuk.com