Arenacross ready for Birmingham this weekend! 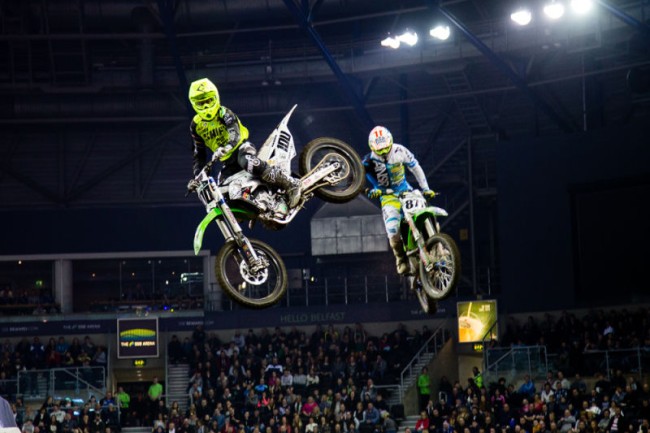 The next stop on the Monster Energy Arenacross Tour, powered by Ford Ranger, is a double-header at the Genting Arena, Birmingham, this weekend from 7.00pm on Saturday the 23rd, and 3.00pm on Sunday the 24th of January.

The West Midlands venue will host rounds six and seven of the eleven round series and the latest news is that, to ring the changes between the two rounds, the Arenacross track will be demolished once racing is completed on Saturday evening, to make way for an all-new and equally technically-demanding circuit to be built for Sunday’s race action.

Also on the Arenacross agenda for the weekend are the only Pre-Show Pit Parties of the Tour, where fans can get up close and personal with the teams, racers, Freestyle guys and Monster Energy girls. The party gets underway three hours before Show time, on both days, in a massive marquee situated right next door to the Arena. As well as the chance to meet the racing and Freestyle stars, there’ll be music supplied by the Monster Energy DJ, food and drink, games and competitions, AX merchandise and partners’ trade stands. It’s pretty exclusive and with plenty of photo opportunities and autograph sessions, it’s the perfect way to get revved-up for the show ahead.

Access to the Pit Party is free-of-charge for Arenacross ticket holders, but spaces are limited and the organiser advises early arrival in order to secure entry and enjoy the AX carnival.

Last weekend’s tension-filled Arenacross two-rounder in Belfast saw plenty of controversy, both on and off the track, with Frenchman Ceric Soubeyras (Geartec Yamaha) getting the ‘red card’ after a heated Head-to-Head semi-final. It was all change at the top of the championship leaderboard too as, once the chequered flag fell, LPE Kawasaki’s Fabien Izoird swooped to the front to take the points leader red plate by just two points, ahead of fellow countryman Soubeyras. SR75 Molson Racing Suzuki team-mates Thomas Ramette and Cyrille Coulon currently hold third and fourth, and Josh Hansen (SJR Kawasaki) is in fifth place. With just 17 points separating the top five, there is all to play for this weekend and sparks are sure to fly.

The stakes are also high in the all-important team championship, and the points are close, with SR75 Molson Racing Suzuki on 161 points, LPE Kawasaki 138, SJR Kawasaki 138, Buildbase Honda 120 and Geartec Yamaha 96.

Tickets are on sale now from £10.00 for children and £19.00 for adults, with a ticket for a family of four from just £49. Or why not view Arenacross from the best seat in the house and experience a truly VIP club class night out. You’ll get to meet superstar riders such as Edgar Torronteras, Jamie Squibb, Adam Chatfield and Josh Hansen and even get an exclusive opportunity to walk the race track just before doors open to the public.