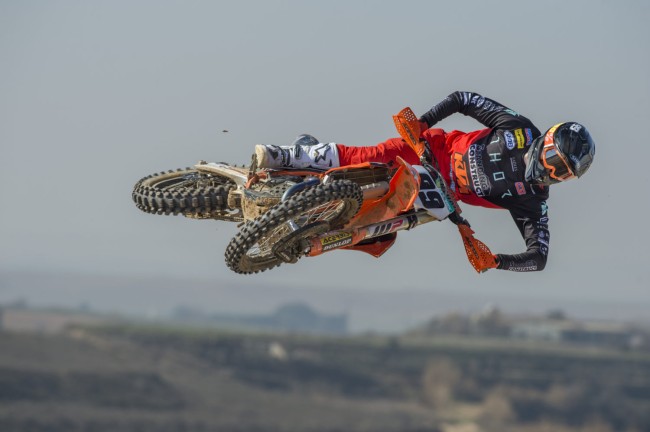 Max Anstie got accidentally knocked down by his good friend Shaun Simpson in opening lap of a frantic second moto, but fortunately the Brit says he will be able to compete this weekend in Portugal.

Anstie, who had a brilliant first moto running second to Tony Cairoli until a crash dropped him fourth, was looking for an overall podium but the crash ended that aspiration.

Anstie was forced to retire with the pain and later had scans on his stomach, but fortunately there is no internal damage and the tough and talented Brit will get another shot at getting on the podium this weekend at Agueda.

Anstie commented: “Solid first moto, running second for most of it then I went down and got my gloves covered in a load of mud! Ended up in P4. Second moto I didn’t make it around the first lap! Crashed and took the bars to the stomach. Had a scan at the medical centre and there’s no internal damage, the bars missed the important bits. So a few days and I should be good to go again. Look forward to Portugal.”