Anstie on his hand injury, Covington on a podium at his home GP 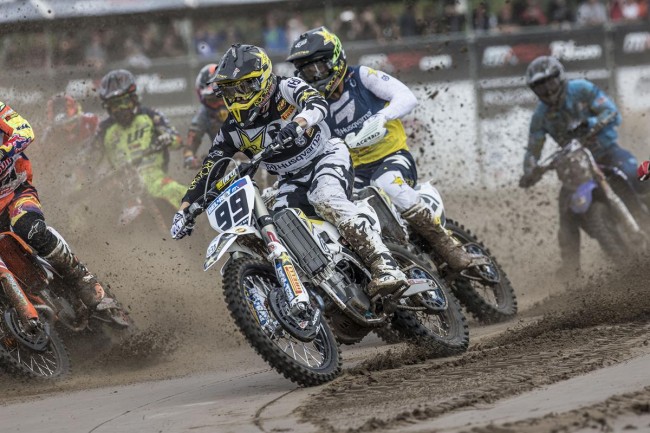 Making the most of a tough round 17 of the FIM Motocross World Championship, Rockstar Energy Husqvarna Factory Racing rider Thomas Covington secured third overall in the MX2 class at his home MXGP of USA. Gaining valuable points the American has moved up to fifth in the MX2 World Championship standings with two rounds to go.

Contested under warm temperatures the MXGP of USA proved to be challenging for all competitors. The weekend at the sandy track in Florida started in the best possible way for Covington, with the Rockstar Energy Husqvarna Factory Racing MX2 class rider getting an impressive win in his qualifying moto.

Starting from pole position the American fired his FC 250 machine to two holeshots in the final MX2 motos. Holding on to the lead for the first five laps in moto one, Thomas finished in the runner-up spot. Racing in second for the majority of moto two, he eventually crossed the line in fourth place.

In the MXGP category, Rockstar Energy Husqvarna Factory Racing’s Max Anstie earned a positive fifth-place result in the overall class standings. Battling on with a hand injury he picked up on Saturday, the MXGP class rookie wrapped up the GP with a pair of sixth-place results.

Closely following Anstie in the overall MXGP results was his teammate Max Nagl, with the German securing sixth overall at the MXGP of USA. Getting the holeshot in moto one, Nagl battled hard to eventually bring his FC 450 home in fifth place. Feeling the effects of the hot and humid weather in moto two, Max placed 11th at the chequered flag.

Making an impressive recovery from a big crash in moto one, Gautier Paulin came back strong to finish moto two with a solid fourth-place result. With two rounds and four motos remaining in the 2017 MXGP series, the Rockstar Energy Husqvarna Factory Racing rider remains third in the MXGP class’ provisional championship standings.

The Rockstar Energy Husqvarna Factory Racing team will return to action at round 18 of the 2017 FIM Motocross World Championship in Assen, the Netherlands on September 8/9.

Thomas Covington: “Overall, I had a great weekend. Getting the win in the qualifying race I then got two holeshots in the final motos and earned one more podium result for the season. My speed was good this weekend and I felt I could have gone even higher in the overall but the heat on Sunday was unbearable. I’ve been living in Europe for a while so I wasn’t used to this heat. In moto one I rode a solid race for second. Then in moto two I was following RJ Hampshire in second and decided to make a move to get closer to him but I felt I was running out of energy. I might not have been able to go for the win but my riding was good and I’m happy I got on the podium at my home GP.”

Thomas Kjer-Olsen: “I felt good all weekend. In moto one I got a decent start and quickly got myself into fifth place. Despite a few mistakes I kept my fifth position until the end and that was good. I started moto two in fourth place but made a small mistake and hit the ground in the opening lap. Trying to get back up to speed after the crash I felt I was running out of energy. I felt that the heat and humidity got the best of me and my lap times could not improve no matter how hard I tried.”

Max Anstie: “I rode two solid motos and I’m satisfied with fifth overall. I didn’t have the best of starts to my weekend in the US. In the qualifying race I got hit by a stone and badly bruised my hand. Luckily it was nothing major, just some bruising. My starts were fine, just not that great and I had to make a few passes in both motos. Getting a pair of sixth place results for fifth at the GP is a good result considering how the weekend started. The work continues for me as we head back to Europe for our last two GPs.”

Max Nagl: “The speed was there this weekend. I had a great qualifying moto where I got a fifth-place result. In moto one I got the holeshot and quickly found myself racing in second behind Eli Tomac. Midway through the race I felt tired so my pace dropped a bit and I finished fifth. Conditions at the track were very rough. It was very hot and really humid and it was hard to keep pushing until the end of each moto. I expected to recover well during the break but then again I felt tired in moto two. I got off to a good start but somebody hit me from the back two corners after the gate dropped. I did my best for 11th in moto two and sixth overall at the GP.”

Gautier Paulin: “It was an up and down weekend so I’m happy with getting fourth in moto two. I felt good at this track but two crashes in moto one made it really hard for me to secure a good overall result. My first crash came after landing from the big quad jump. The dirt was loose there so I went over the bars. I got back up but somehow I could not focus on the race and ended up crashing again and bending my bars. Luckily, I avoided any injury. In moto two I had a great start and pushed hard for fourth at the finish. It was really the best I could do as I also felt I was running out of energy. I’m looking forward to going back to Europe now. We have two more rounds to go and I want to end the championship on a high.”