Another tough weekend for Evans and Pichon 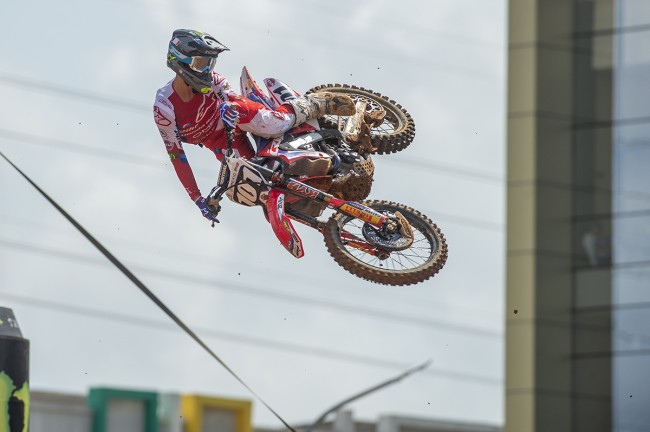 Following the lengthy trip to Indonesia, the country that was playing host to round eleven of the 2019 FIM Motocross World Championship, Honda 114 Motorsports basked in glorious sunshine at the all-new venue of Palembang. The squad was back to full-strength this past weekend, as Mitch Evans was able to race after that horrific crash at the previous event in Germany that left him with a hematoma on his back.

The ailment did not seem to bother Evans too much on the first day of racing, as he pulled an amazing start in the qualifying heat and chased the eventual polesitter before settling into the runner-up position. It was a great start to the weekend, but one that he could not replicate in the first points-paying heat. A very hard crash on the start straight left him at the back of the field, then an additional fall forced him to drop out of the heat prematurely. Evans did not line up for the second moto, but still runs seventh in the championship.

Zachary Pichon, the second rider on the Honda 114 Motorsports squad, got off to a reasonable start in the first points-paying moto on Sunday and eventually reached the chequered flag in fourteenth. A freak issue forced him to retire from the second heat prematurely though and ultimately settle for seventeenth in the overall classification. Pichon did manage to gain a position in the championship standings at round eleven, so he now sits in twenty-fifth.

Honda 114 Motorsports will now turn their attention to the twelfth round and hope for better luck at what will be the final Indonesian stop on the 2019 FIM Motocross World Championship calendar.

Mitch Evans: “Saturday was really good. I was really happy with that. Today just was not our day. Got caught up on the start straight and had a pretty big crash there, but I was not too banged up. Then after that, I kind of jumped off the track a little bit on one of the jumps. The dirt was so soft and I just went over the bars. The bike landed on me and whatnot, so I was pretty beat up and pretty sore. I pulled in from that one and decided not to race the second one, because the pain was too much. Pretty bummed with it. That is now four races in a row that I have not scored points in.”

Zach Pichon: “It was a hot weekend. I had a decent start in first moto, struggled with the heat and finished fourteenth. I was then a bit disappointed after bike problems in moto two. A tough weekend, but I am motivated for the next one.”

Livia Lancelot (Team Manager): “Well, I just want to forget this weekend as soon as possible. Between bike issues and crashes we did not score a lot of points. We will keep working to be back where we need to be. All of the team apologise to our fans and sponsors for these bad results.”