Anderson, Osborne and Wilson on a strong St. Louis 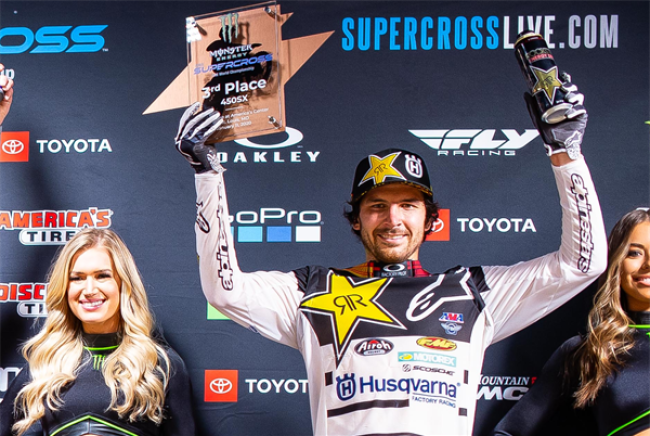 Decrease Font Size Increase Font Size Font size Print Send
It was a solid day for the Rockstar Energy Husqvarna Factory Racing Team as Jason Anderson and Zach Osborne battled their way to top finishes at the second round of the 2020 AMA Supercross World Championship Series. After an intense battle in the Main Event, Anderson came away with third-place in the highly-competitive 450SX class, while Osborne fought hard to round out the top five inside The Dome at America’s Center in St. Louis, Missouri.
450SX
Qualifying third overall on the day, Anderson lined up in 450SX Heat 2 where he got off to a fourth-place start and worked his way into third early on. A quick mistake dropped him back to fifth, where he ultimately finished in the heat. In the Main Event, Anderson got off to a great start as he assumed the fourth-place position on the opening lap. He quickly worked his way into third, dicing back-and-forth with his teammate Osborne. Anderson eventually settled into the third-place position and he brought it home for his first podium finish of the season.

“I’m just out here enjoying myself,” Anderson said. “I feel like I was riding pretty good in the Main. I got off to a good start and I kind of let the battling happen in front of me and then I worked my way through the guys I could and settled into third.”
After fighting through an illness at the season opener just one week ago, Zach Osborne bounced back with a solid day in St. Louis. He had a great start to 450SX Heat 2 as he settled into second on the opening lap. Capitalizing on a mistake by the race leader, Osborne briefly took over the lead before settling into a second-place transfer position. In the Main, he grabbed the holeshot and led the opening lap before dropping back to second on lap two. He engaged in an intense battle early on, battling back and forth inside the top-five before ultimately securing fifth for the night.

“All-in-all it was a good night and a good rebound from last weekend,” Osborne said. “It was good to get a solid finish and restart my season after being really ill last weekend.”
Dean Wilson, the 10th-place qualifier, grabbed a top-10 start in 450SX Heat 1, where he battled his way up to eighth for a solid transfer into the Main Event. In the Main, Wilson got off to a great start where he rounded the opening lap in eighth place. He battled inside the top-10 for a few laps before settling into the 13th position.

“Tonight was a small improvement for me,” Wilson said. “I had a good start and ran in the top-10 for a few laps but I’m just not prepared to be at that point. I just have to keep working and building from here.”
250SX West
In 250SX West Heat 1, Mosiman got off to a great start and battled his way to a second-place transfer position. In the Main Event, Mosiman had a good jump off the start but things quickly took a turn for the worst when another rider came into him in the first rhythm section causing both riders to go down. Re-mounting in dead last, Mosiman put his head down and charged as hard as he could to ultimately salvage 20th place for the day.

“I actually felt pretty good, better than last weekend,” Mosiman said. “There was carnage in the first rhythm section and I got bumped and then landed on and that was just kind of the beginning of the end. I’m pretty stoked to get out of St. Louis healthy and on to the next round.”