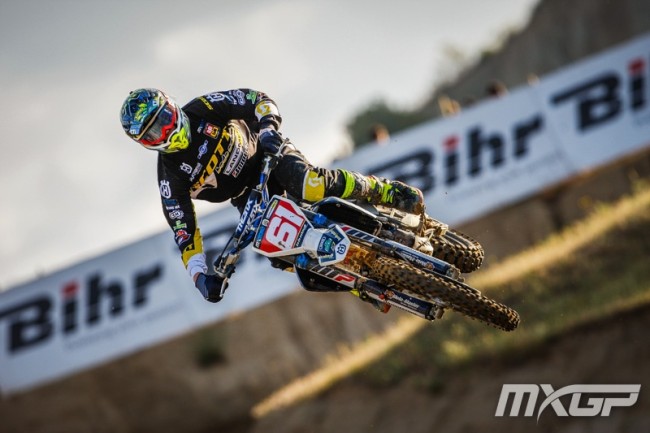 The fifth round of the European Championship EMX250 also took place with Bodo Schmidt Motorsports’ Thomas Kjer Olsen extending his championship lead with yet another double moto victory and round overall.

It was a drizzly start to the weekend for the young guns racing the EMX125 presented by FMF championship. Their first race took place yesterday after the premier classes, MXGP and MX2, had qualified which made for a mega rutty and chopped up track here in Talavera de la Reina where KTM Silver Action’s Stephen Rubini took his second race win of the season ahead of KTM De Carli Racing’s Gianluca Facchettiand Bud Racing Monster Energy Kawasaki’s Brian Strubhart Moreau.

Because it poured down yesterday, the MXGP track crew put in a lot of work last night, which paid off because the track was impeccable this morning for race two. As the sun peeked through the clouded blue skies, the gates slammed to the ground. The championship leader Sahkar Racing KTM’s Jago Geerts couldn’t have wished for a better start to the race as he hooked up perfectly to pull a mega holeshot over Bud Racing Monster Energy Kawasaki’s Kim Savaste, Yamaha MJC’s Zachary Pichon and KTM De Carli Racing’s Gianluca Facchetti.

Yesterday’s Race 1 winner KTM Silver Action’s Stephen Rubini didn’t get off to the greatest of starts but knuckled down right away and by the end of lap two had railed around Facchetti for fourth before tackling Pichon as well. MX2 star, Rockstar Energy Husqvarna Factory Racing’s Max Anstie was watching the race and commented, “on a 125 out here in Talavera it’d be important to keep the bike light because the deep ruts are really sticky, even on the 250F when you go in too deep you lose a lot of power”. He is right, the track was really sticky and tricky in places, which became evident when Savaste hit a clay rut and crashed out of second.

At the 10-minute mark, Facchetti got on the throttle and stylishly pinned it around the outside of Pichon for third while Rubini started taking chunks out of Geerts lead. With two-laps to go, Rubini had caught the young Belgian and charged down the inside of him to take over the lead. He pulled away for what was thought to be his third consecutive race win.

While Rubini did cross the line first, he was docked ten places for jumping on waved yellows which gave Geerts the race win ahead of Facchetti, Pierre Goupillon, Pichon and IceOne Husqvarna Racing’s Mikkel Haarup.

It would have been perfect weekend for KTM Silver Action’s Stephen Rubini who won both races, but rules are rules and they need to be respected for everyone’s safety. Rubini was dropped back to fourth for the weekend and KTM De Carli Racing’s Gianluca Facchetti took his first ever EMX125 round victory. Sahkar Racing KTM’s Jago Geerts extended his points lead with second overall while Pierre Goupillon also hit a career milestone with his first podium finish in third.

Throttle control was of the essence in race one yesterday as the EMX250 riders had to race with an ugly dark cloud hovering above them. Team Suzuki World MX2’s Bas Vaessen took his first holeshot of the season ahead of KTM Factory Junior’s Spanish prodigy Jorge Prado and led the early part of the race. At the halfway mark the series leader Bodo Schmidt Motorsports Thomas Kjer Olsen had emerged and took the lead through the rhythm section and went on to win by five seconds over Vaessen and Prado.

It was a dramatic start to the second moto today as DP19 Racing Yamaha’s Morgan Lesiardo cart-wheeled down the straight and took out approximately five other riders as KTM Factory Junior’s Jorge Prado had the fence-lines going mad with a massive holeshot over KTM Silver Action’s Davide Cislaghi and Bodo Schmidt Motorsports Thomas Kjer Olsen.

Thomas Kjer Olsen, also known as ‘TKO’, was in a league of his own and made light work of the young rookie, Prado, for the lead on lap two while Honda J-Tech’s Nick Kouwenberg, Bud Racing Monster Energy Kawasaki’s Darian Sanayei and Anton Gole went bar-to-bar for third.

Bud Racing’s American rider, Darian Sanayei, struggled yesterday but lined up today in a much better frame of mind and charged hard to pass Kouwenberg and Prado for second place on lap four.

Prado kept his fans screaming as he tried to hold off Gole who was being hounded by Bud Racing Monster Energy Kawasaki’s Nicolas Dercourt. Kouwenberg dropped back, as did Sanayei when a mistake forced him back to fifth.

With five minutes to go Gole dropped the hammer and threw together a combo of inside and outside lines to pass Prado for second. Prado was then left to deal with Dercourt who had ditched his goggles which is never ever good. Dercourt put the same move on Prado, the one that saw Gole take second, and took the spot briefly before being passed back.

As Dercourt ducked and dived roost, the two-lap board came out. Monster Energy Kawasaki Racing Team’s Hunter Lawrence had come from well outside of the top fifteen to join the party too. While charging after Prado, Dercourt left the door open and let his teammate Sanayei through for fourth and then was dropped back to sixth by Lawrence.

Bodo Schmidt Motorsports’ Thomas Kjer Olsen was flawless this weekend and went 1-1 to top the box for the third time this year. KTM Factory Junior’s Jorge Prado was second overall while Anton Gole rounded off the podium in third.

With a big puff of blue two-stroke smoke the second EMX300 Presented by FMF Racing race burst into life with Brit Matt Moffat taking a tasty holeshot ahead of fellow Brit Aaron Pipon and Spaniard Francisco Utrilla. Pipon had the crowd on their feet when he capitalized on a mistake by Moffat and scrubbed past the Brit to take the lead in style. Unfortunately, it was short lived as he couldn’t run that pace the whole race and eventually dropped back to seventh, but still a good effort.

Meanwhile, the three guys who owned race one, Mike Kras, GL12 Yamaha’s Brad Anderson and Rockstar Energy Husqvarna Factory Racing’s Yentel Martens were buried off the start and had their own little race going on in a battle for fifth. Anderson went right around the outside of Martens and instantly pulled a gap while Martens had to ride defensively as yesterday’s Race 1 winner, Kras, was hard on his case.

At the 12 minute mark it was a battle of the Brit’s with Anderson right on the rear wheel of Moffat but passed him with ease when he took a tighter line at the bottom of a steep hill, and also took the lead.

On lap five, Martens set the fastest lap of the race and picked off Moffat and Utrilla for second place with only a handful of laps to go. That urged Kras to get on the gas, which he did as he followed Martens through for third.

At the checkers, Anderson took a very tidy race win after cruising the last lap to win by three seconds over Martens. It was an epic battle between the Belgian, Martens, and the Dutchman, Kras, who are long time rivals. Martens managed to hold onto second and forced Kras to settle for third. Utrilla and Moffat rounded out the top five.

“I felt good all weekend,” GL12 Yamaha’s Brad Anderson said when being interviewed as the EMX300 round of Spain winner. Mike Kras went 1 – 3 for second while Rockstar Energy Husqvarna Factory Racing’s Yentel Martens rounded off the podium in third.