Amian on his GasGas riders at Valkenswaard: Almost speechless 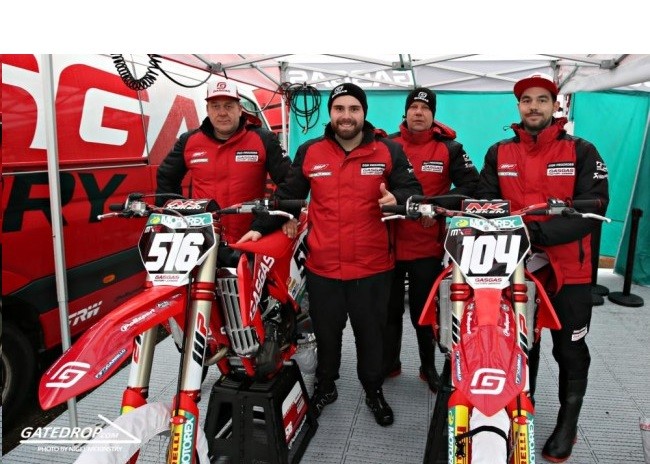 The second race of the season took place with mixed weather conditions in the deep sand of Valkenswaard (NL). Both athletes were highly motivated and confident.

The qualifying on Saturday noon showed that the power density in the MX2 is very narrow. At the end of the qualifying session, Simon Längenfelder finished 19th and Jeremy Sydow 20th.

In the qualifying race, both athletes came back from the first round in the middle of the field and fought their way towards the top 10. In lap five, ranking 14th, Sydow crashed unhappily and ended the race in 31st place. Längenfelder, however, fought his way up to 12th place at the end of the race and thus had a good starting position for the championship races.

Sunday morning started with bright sunshine, but it started to rain just in time for the start of the MX2. Jeremy Sydow, who was only allowed to roll onto the starting ramp as 31st, got off to a very good start and was in the top 15 from the start. Sydow was in 15th place throughout the race and finished up in 14th place. Simon Längenfelder, however, was involved in a big crash and had to chase the field. Round by round, the only 15-year-old was able to improve and in the end just missed his first championship points with 21st place.

In the second race, both athletes came away brilliantly at the start and finished fifth and sixth at the end of the first lap. Jeremy Sydow temporarily took third place on lap two, but had to hand it over to Simon Längenfelder on lap eight. At the end of the race, Jeremy Sydow, who broke his collarbone four weeks ago, ran out of steam, and he went back to the strong 8th place. Längenfelder, in his second world championship race, was extremely strong at just 15 years old and defended third place until two laps before the end. In the end, he had to admit defeat to two significantly more experienced and stronger pilots and took the sensational 5th place.

Justin Amian: “I’m almost speechless about the performance of the two athletes in the second race. Both worked hard all winter and harvested the first small fruits. Now it is time to continue working in a focused manner and hopefully build on this results in the next races. ”

Simon Längenfelder: “After the qualification race with 12th place, I was very happy. Unfortunately, I fell twice in the first race and missed the points, which really annoyed me. So I was all the more motivated for the second race and I’m very happy with 5th place. At the current time of the season, I never expected to be in the front. I hope to show this more often in the course of the season. ”

Jeremy Sydow: “After the qualifying race (31st place) I was a bit sober, but got off to a good start on both motos and was already satisfied with 14th place in the first race. In the second race it was even better and I had a strong duel with Simon. The feeling of being in the front motivates me even more and I am very happy with the 8th place. The hard work with the entire team over the winter is already paying off and we hope we can build on these results. ”