American’s win the battles but Herlings and Gajser win the war! 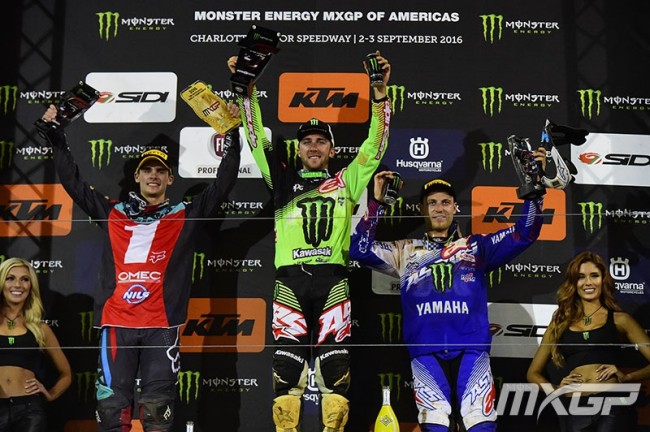 CHARLOTTE (United States of America), 03 September 2016 – The nature of motocross is that it is ever evolving, from bike development, to the creation of tracks and their venues, to the level of skill and fitness that is required of one to compete at a professional level. Impossible is nothing, and the Monster Energy MXGP of Americas, which took place at a venue that is so often described as the heart of motorsport, the Dirt Track at Charlotte Motor Speedway, is proof of that.

The track that hosted the penultimate round of the FIM Motocross World Championship was one of the most iconic stops this season. It turned The Dirt Track, a famed speedway oval, into a world-class motocross track in less than a week, but that wasn’t what was most impressive. The biggest accomplishment of the weekend was the track, and how it shaped up after being hammered by a hurricane less than 24 hours before race day, and in terms of the racing, it was the crowning of two champions, Honda Gariboldi’s Tim Gajser and Red Bull KTM Factory Racing’s Jeffrey Herlings, who both locked up the titles in MXGP and MX2 with three races to spare. Full credit must be given to the grand prix winners as well, Monster Energy Kawasaki’s Eli Tomac and Yamalube Star Racing Yamaha’s Cooper Webb who were both deserving of their first ever grand prix victories.

A massive shout out has to be given to the MXGP track crew who watched the weather and sealed the track until the rain had passed. After the first day of the weekend was cancelled due to the weather, it was truly incredible to rock out to The Dirt Track in the morning and see how immaculate the track was.

ET couldn’t be a more fitting nickname for Monster Energy Kawasaki’s Eli Tomac who was on a whole other planet yesterday. He didn’t just win; he blew the door of MXGP off its hinges with his unmatchable pace. “When I saw the water yesterday I thought the track was going to be a sloppy mess, but it turned out perfect, the dirt was as good as you can get for the type of dirt it was, I liked the track, it was a lot of fun, and the racing was a lot of fun, so I look forward to Glen Helen next week.”

Honda Gariboldi’s Tim Gajser is one rider that is talented beyond the realms of possibility. After what has been an absolutely mind-blowing season, where he has won 8 qualifying races, has led 247 laps, has won 15 races, 7 grand prix’, and has had 15 podiums out of a possible 17, the rookie finally wrapped up the MXGP world title in the first race yesterday. What’s even more impressive is that the Slovenian star has now claimed back-to-back world titles in two different classes and is the first rider to do so since Greg Albertyn with his 125cc title in ’92 and 250cc title in ’93.

As the 2014 vice world champion, Monster Energy Yamaha Factory Racing’s Jeremy Van Horebeek has struggled to find his place in MXGP this year. There is always a case for the importance of a good start, and Van Horebeek had a good one yesterday, although it didn’t just come down to that. The Belgian was surprisingly fast all day long, it all started when he topped the charts in Free Practice and his 3 – 5 results transpired him into his second podium finish of the season. “We have just been testing some new things on the bike and trying to get off to a good start. I got two good starts today, I felt good all day, I just have to give this one to my team,” he said, “they have been working so hard, and it’s paying off, so this one is for them.”

Red Bull KTM Factory Racing’s Glenn Coldenhoff carried the momentum of last weekend’s podium performance into the Charlotte Motor Speedway and only just missed out on a bottle of pop by 1 point. Nevertheless, it’s good to see the Dutchman back on the pace and battling up front.

Last weekend’s grand prix winner, Monster Energy Kawasaki Racing Team’s Clement Desalle, had a mediocre day in the office and had to settle for fifth overall ahead of Team HRC’s Evgeny Bobryshev who was debuting the 2017 Honda CRF450 this weekend.

Red Bull KTM Factory Racing’s Jeffrey Herlings. What can we say that hasn’t already been said? The Bullet is indisputably the best MX2 rider in the world, and even though he didn’t have to win race one today, he put on a clinic anyway, just ‘coz he can, and as a result he FINALLY managed to clinch his third FIM MX2 world title. “Maybe it should have been five, but I had some bad luck with some big injuries, so I am just happy to get this one out of the way,” he said.

Although he wrapped up the title, which was his ultimate goal, he lost his first grand prix of the year to Cooper Webb, “I am just going to be honest,” he said, “Cooper was faster than me in the second moto, I didn’t have anything for him. I know people are going to be saying he’s faster, or I’m faster, but we both went 1 – 2, you can’t tell who’s faster from that, it is just one race, you need a whole championship to decide that, with different tracks, different days and different conditions.”

Yamalube Star Racing Yamaha’s Cooper Webb came in riding a high after claiming two titles in the United States this year. After what was a very successful year, the North Carolina native, couldn’t wish for a better way to wrap up his 250cc bike days than with a grand prix win for his team and the adoring public.

It must be tough when you’re the world’s fastest rookie, pinned to be the next big thing, but it was water off of a ducks back for Monster Energy Kawasaki’s Austin Forkner who was perhaps the most impressive rider this weekend. There was a lot of talk over this eighteen-year-old phenomenon going into the Monster Energy MXGP of Americas, and he showed us why with a 3 – 3 performance for third overall.

Rockstar Energy Husqvarna Factory Racing’s Thomas Covington maintained his reputation for performing well at the overseas with his pair of fourths for fourth, while HSF Logistics Motorsports Calvin Vlaanderen introduced himself to the United States of America with a top five finish, fifth.