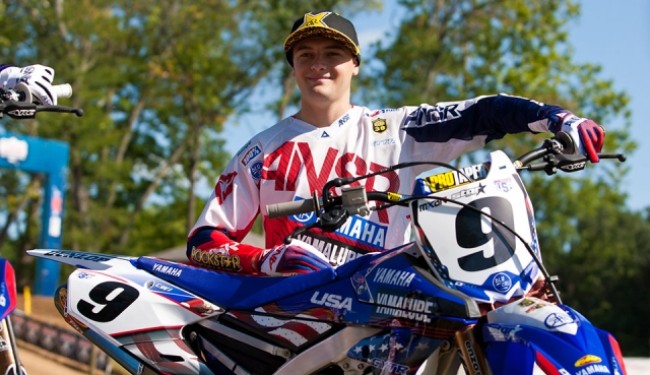 SAN BERNARDINO, Calif. (September 2, 2015) – In just a matter of weeks, the hills surrounding legendary Glen Helen Raceway will come to life with a global showcase of motocross talent. On September 19-20, the FIM Motocross World Championship (MXGP) will make its anticipated return to Southern California for the 18th and final round of the 2015 season – the Monster Energy MXGP of USA, presented by Chaparral. This exclusive stateside visit for the World Championship will feature a convergence of American and international stars, setting the stage for a must-see battle of racing supremacy.

With newly crowned MXGP Champion Romain Febvre leading the way aboard his Yamaha Factory Racing Yamalube machine, several of America’s biggest names from the Pro Motocross Championship are prepared to go head-to-head against Europe’s best in a one-time-only showdown.

Josh Grant is in for the USGP on the factory Kawi and is always super fast at Glen Helem. Pic: Monster Energy Kawasaki

The Rockstar Energy Husqvarna Factory Racing duo of Jason Anderson, capping off his first full season of premier class competition, and Christophe Pourcel, a former World Champion, each garnered overall podium results during the Pro Motocross season. Monster Energy Kawasaki’s Josh Grant is the hometown favorite, hailing from nearby Riverside, and will swing a leg over the Factory Kawasaki one last time in 2015.

Red Bull KTM’s Dean Wilson will continue his comeback from a serious knee injury and make just his fourth motocross start of the season, while Davi Millsaps will make his highly anticipated debut for BTOSports.com KTM, just a handful of weeks after signing with the team.

Serving arguably the most intriguing role of the Pro Motocross contingent is Yamalube/Star Racing Yamaha’s Cooper Webb. After racing to a pair of overall victories in the 250 Class this summer, the newest member of the AMA US Motocross Team for the FIM Monster Energy Motocross of Nations will make his 450cc debut at Glen Helen in the MXGP division.

Max Anstie will be looking to go 1-1 at Glen Helen, a track he has ridden on many times while based in the USA. Pic: Monster Energy

In addition to the excitement surrounding which rider will emerge victorious in the world’s showcase class, the wild MX2 division is sure to produce unpredictable competition. With the championship hunt coming down to the wire between Honda Gariboldi’s Tim Gajser, Red Bull KTM Factory Racing’s Paul Jonass and Monster Energy DBT Kawasaki’s Max Anstie, there will be plenty of drama in the battle to crown a champion. However, with the addition of former world champion and Red Bull KTM’s Pro Motocross Championship runner-up Marvin Musquin, the Troy Lee Designs/Lucas Oil/Red Bull/KTM duo of Jessy Nelson and Shane McElrath, as well as a competitor from legendary Monster Energy/Pro Circuit/Kawasaki stable, a little added shakeup to the title fight is to be expected.

Simply put, with such a strong contingent of home soil stars ready to converge for a head-to-head battle against an incredibly talented international field, the stage is set for the Monster Energy MXGP of USA at Glen Helen Raceway to cap off the racing season with an event no motocross fan will want to miss.