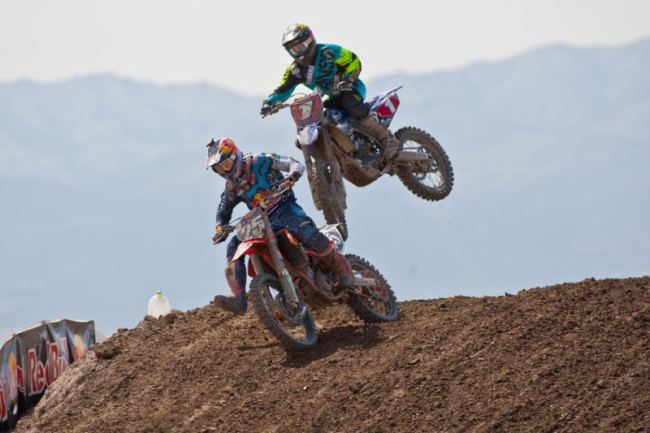 MORGANTOWN, W. Va. (August 18, 2015) – After 11 grueling weekends on the roughest, toughest and most renowned tracks in the world, the 2015 Lucas Oil Pro Motocross Championship, sanctioned by AMA Pro Racing, will reach a climactic conclusion this Saturday, August 22, with the series’ return to Ironman Raceway in Crawfordsville, Indiana. The newest venue in American motocross sits in one of the country’s motorsports hotbeds, just outside famed Indianapolis, and fittingly enough one of the most compelling battles for the Gary Jones Cup in series history will come to an end in the 250 Class at this weekend’s 2nd Annual Bud Light Ironman National.

It’s been a seesaw title fight between reigning 250 Class Champion Jeremy Martin and Red Bull KTM Frenchman Marvin Musquin throughout the entirety of the summer. After beginning the year tied for victory at Hangtown, the pair has traded massive swings of momentum over the course of the last 10 rounds. This has led to what will be the tipping point at Ironman Raceway on Saturday afternoon, with just two points separating the Yamalube/Star Racing Yamaha points leader and his world champion challenger.

While statistically Martin and Musquin have had comparable seasons, they have only raced one another on the track a few times, and at no point have they actually gone head-to-head for victory despite being the two winningest riders in the division. By virtue of his triumphant effort last weekend via tiebreaker over Musquin, Martin now has five overall wins to his credit this season while Musquin has three. However, Musquin has the upper hand in moto wins with 10, versus Martin’s nine. As a result, neither rider truly has the upper hand coming into this weekend’s finale in Crawfordsville.
The 250 Class has seen some dramatic finishes in the past, most recently in 2003 when only seven points sat between eventual champion Grant Langston and Ryan Hughes. That year the final round never happened as heavy rains flooded the Kenworthy’s track in Troy, Ohio, on two separate occasions, forcing a cancellation. Just a few years before that in 2000, Travis Pastrana and Stephane Roncada engaged in a similar back-and-forth title fight as Martin and Musquin, with Pastrana claiming the title by just two points thanks to a victory at the final round in which he outscored Roncada by eight to overtake him in the standings.

If Musquin is to become the first ever Frenchman to win the Gary Jones Cup in Lucas Oil Pro Motocross Championship history, he will need a Pastrana-like effort on Saturday to ensure it. A 1-1 effort by Musquin would allow him to take the title, no matter what Martin does, and it’s an accomplishment Musquin has already achieved twice this season. Expect the veteran to come into Ironman Raceway with that exact mentality in what will be his final 250 Class race, looking to do what fellow French riders Roncada and Chrisophe Pourcel came close to doing, but were ultimately unable to achieve before him – win a national championship. Adding to Musquin’s confidence will no doubt be his position as the defending winner at Ironman Raceway. Although last year’s inaugural event was plagued by heavy rains, Musquin knows what it takes to win when the pressure is on and is surely prepared to make a run at history.

On the other side of this incredible battle Martin is chasing his own piece of history, looking to become the first rider since Ryan Villopoto in 2007-2008 to win back-to-back 250 Class titles. The division has seen an impressive rotation of household names break through for their first career championships over the last six seasons – Ryan Dungey, Trey Canard, Dean Wilson, Blake Baggett, Eli Tomac and Martin – but a repeat championship run hasn’t been realistic until now, as past titleholders have either moved out of the division or simply never factored into the championship the following season. As the points leader and most recent winner, Martin enters Crawfordsville in the drivers seat. Moreover, he’s been in this exact position before and knows better than anyone else in the 250 Class how to close out a championship.
Given what has unfolded between these two riders throughout the 2015 season, there is simply no way to know how everything will play out on Saturday afternoon, which sets the stage for arguably the most anticipated 250 Class finales in over a decade. With such a small margin sitting between Martin and Musquin, there’s a very good chance that the rider who earns the most points on Saturday will also hoist the Gary Jones Cup that afternoon. Luck won’t need to factor into this showdown. It will be a showcase of pure, all-out racing where the points will fall as they may once the final checkered flag flies.

While all the attention on Saturday will rest squarely on Martin and Musquin, a couple riders could play a significant role in the outcome of the final standings as they chase their own strong finish to the season. Martin’s Yamalube/Star Racing Yamaha teammate Cooper Webb has been a fixture at the front of the field at almost every race since his return from injury. Last weekend he played a major role in allowing Martin to maintain his points lead, separating his teammate from Musquin in the final moto, which clinched the overall win. Webb’s role is an intriguing one and he’ll surely also be closely watched as the action unfolds. In addition to Webb, Monster Energy/Pro Circuit/Kawasaki’s Joey Savatgy wants to cap off his breakout season with a championship podium finish. Having claimed his first career win just two races ago, Savatgy currently sits third in the standings, five points ahead of Rockstar Energy Husqvarna Factory Racing’s Zach Osborne.

Over in the 450 Class, Ryan Dungey’s clinching of his third Edison Dye Cup last weekend in Utah means the Red Bull KTM rider will enjoy a victory lap of sorts in Crawfordsville. The track likely carries bittersweet memories for Dungey as it is where his hopes of winning the title last season took a major blow, but with the trophy and number one plate already in hand it’s a celebratory final weekend for the most successful rider of the 2015 season. With just two motos remaining, Dungey will look to add to his incredible statistics this season, possibly extending both his moto winning streak to seven and his podium streak to 12, while also maintaining his distinction as the sole provider of KTM’s points in the manufacturer standings. With a win, Dungey would also be able to check off another track of his list of venues he’s yet to win at, which he did last weekend in Utah.

With the championship decided, the remaining battle in the 450 Class comes down to Autotrader.com/Toyota/Yamaha’s Justin Barcia and RCH Soaring Eagle/Jimmy Johns/Suzuki Factory Racing’s Ken Roczen, the defending 450 Class Champion, for the runner-up spot in the final standings. Barcia’s impressive rise to prominence over the second half of the season has allowed him to gain the upper hand and carry a five-point advantage over Roczen into Ironman Raceway. Since fighting his way back from a crash in the first turn of Moto 1 at Unadilla, Roczen has posted three consecutive second-place moto results, putting some much-needed momentum back on his side. Roczen is the defending race winner in Crawfordsville and is no doubt motivated to end his run with the number one plate on his bike with his second victory of the season. Barcia, on the other hand, would like to head into the upcoming Motocross of Nations, where he will serve as Team Captain for Team USA, with some momentum of his own and hopes to end his breakout season on a high note.

Over the past year since hosting its first Lucas Oil Pro Motocross Championship event, Ironman Raceway has emerged as one the most popular and highly regarded tracks in the U.S. Sitting right in the heart of one of the most motorsports-crazed pockets of the country, the Indiana National has already carved out a unique place in the championship and in the world of racing as a whole. The dirt is superb, and while the surrounding area is flat, the track offers huge elevation changes and massive jumps, which is always welcome by both riders and fans alike. It may be the newest venue in the championship, but Ironman Raceway fits right in with the best and most globally renowned tracks in the sport.

The Bud Light Ironman National gets underway this Saturday, August 22, beginning at 5:30 a.m. PT / 8:30 a.m. ET with practice and qualifying. Opening ceremonies begin at at 9:30 a.m. PT / 12:30 p.m. ET, immediately followed by racing at 10 a.m. PT / 1 p.m. ET.
MAVTV will carry LIVE broadcast coverage of the first motos at 10 a.m. PT / 1 p.m. ET. Tape-delayed coverage of the second motos will air on NBC Sports Network, beginning at 8:30 p.m. PT / 11:30 p.m. ET.
All the action from Ironman Raceway can also be seen as it happens via the online LIVE-STREAM on ProMotocross.com and the NBC Sports Live Extra app.
Roczen will wear the number one for the final time in 2015.
Photo: Amy Schaaf Noren