AMA Preview: Can anyone beat Tomac in Colorado? 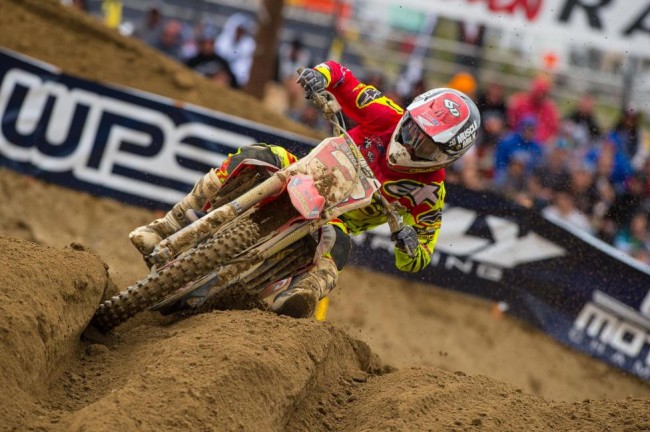 MORGANTOWN, W. Va. (May 26, 2015) – Through the first four motos of the 2015 Lucas Oil Pro Motocross Championship, sanctioned by AMA Pro Racing, only one rider has taken the checkered flag in the 450 Class. Sophomore rider Eli Tomac has begun the summer on a dominant tear aboard his GEICO Honda and the current championship leader now has the chance to bring all the momentum of back-to-back overall wins to his home state of Colorado for the series’ annual trip to the mile high altitude of the Denver area for the 11th Annual True Valley Thunder Valley National in Lakewood. While all eyes will be on Tomac in his quest for even more success, Red Bull KTM’s Marvin Musquin has had a strong start of his own in the 250 Class, winning three of the first four motos this season to take sole possession of the points lead.

At the championship’s second round this past weekend from Southern California’s Glen Helen Raceway, Tomac was once again at the top of his game. While defending champion Ken Roczen made the first statement by posting the fastest lap of practice aboard his RCH Soaring Eagle/Jimmy Johns/Suzuki Factory Racing machine, he ultimately was not a factor in the battle for the win. Instead it was once again Tomac and his budding rival Ryan Dungey, who rides for Red Bull KTM. It was Dungey who initially put himself out front in the first moto, but his KTM lost power on two separate occasions to hand Tomac a relatively easy win and drop Dungey just outside the top five. A strong start from Tomac in the second moto put him out front from the beginning, forcing Dungey to settle for second in a rebound effort.

Tomac’s second straight sweep of the motos combined with Dungey’s misfortune in the first moto has now established a 19-point gap between the two in the championship standings. Tomac has yet to race at his home track since moving into the 450 Class, but he is a former winner at Thunder Valley, emerging triumphant in 2013 while in the 250 Class. On the other hand, Dungey is the most successful rider at the facility, winning three consecutive years from 2010 to 2012, and has finished on the overall podium in all five years he’s raced there in the premier class.

One week after his season looked to be in jeopardy with a stress fracture in his spine, Roczen bounced back to enjoy an all around solid day at Glen Helen. Although he found himself on the ground early in the first moto, Roczen showed his championship mettle to fight from a 37th-place start and finish inside the top 10 in eighth, earning the Battery Tender Ricky Carmichael Hard Charger Award for it. He then went on to finish third in the second moto for fourth overall. That effort also moved him into the top 10 in the 450 Class standings, jumping six spots from 12th to sixth.

After an impressive start to the season at Hangtown, the Autotrader.com/Toyota/Yamaha squad enjoyed the strongest collective team outing at Glen Helen, with both Justin Barcia and Weston Peick finishing inside the top five. Barcia showed serious speed at Hangtown, but a crash in the first moto diminished an otherwise strong effort. At Glen Helen, he kept his Yamaha on two wheels and capitalized on a pair of good starts to post 2-4 moto scores and finish runner-up in the overall classification, his best finish since Unadilla during his rookie season in the 450 Class in 2013. As for Peick, the hometown favorite added to his fourth-place finish at Hangtown with another top five at Glen Helen. He is the only rider other than Tomac and Dungey to finish inside the top five at each round thus far, and as a result he currently sits third in the championship, the highest position of his professional career. The Yamaha duo is undoubtedly feeding off one another and for the first time in its history the Joe Gibbs Racing MX effort has two riders sitting inside the top five in the championship.

Through the first two rounds of the 2015 season, Team Yoshimura Suzuki’s Blake Baggett has established himself as the top rookie in the 450 Class. Another hometown rider, Baggett enjoyed a consistent afternoon at Glen Helen with a pair of seventh-place finishes that placed him seventh overall, and when combined with his fifth-place effort at Hangtown, the Southern California native has quietly positioned himself fourth in the championship and already appears very comfortable on the big bike.

After just missing out on victory at Hangtown, Musquin left little doubt he has every intention of winning his first major U.S. championship in his final season of 250 Class competition. The Frenchman put himself at the front of the field at Glen Helen all afternoon, which allowed him to lead the majority of both motos and earn a 1-1 sweep, giving him 1-2-1-1 moto results to start the season. 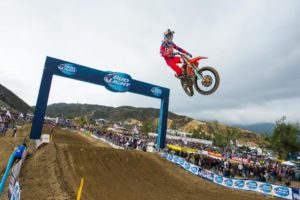 Musquin’s dominant day was made even more significant following the adversity faced by Yamalube/Star Racing Yamaha’s Jeremy Martin, the defending series champion and Hangtown winner. Martin was unable to line up on the starting gate in Moto 1 after his bike failed to start and needed the attention of the entire Star Yamaha mechanical staff, but he did enter the race at the tail end of the field and was able to claw his way forward to a hard-fought fifth-place finish. Things appeared to turn around for Martin in the second moto, but after starting inside the top five he then crashed after making contact with another rider, once again needing to come from behind. He soldiered his way forward for the second time and finished sixth to salvage what could have been a much worse afternoon in seventh overall. While Martin’s damage control was impressive, he still lost valuable ground in the championship standings and faces a 19-point deficit to Musquin heading into Thunder Valley.

The misfortune for Martin and the absence of his teammate Cooper Webb, who missed the race with an ankle injury, opened the door for an extremely competitive battle for the remaining spots on the podium. Red Bull KTM’s Justin Hill, Troy Lee Designs/Lucas Oil/Red Bull/KTM’s Jessy Nelson and Shane McElrath, Monster Energy/Pro Circuit/Kawasaki’s Joey Savatgy and CycleTrader.com/Rock River Yamaha’s Alex Martin all found themselves in the hunt as the afternoon wore on, but in the end it became a historic afternoon for KTM, which swept the overall podium for the first time with Hill and Nelson joining Musquin.

Coming into Thunder Valley, a new rider will emerge victorious at the track. Since the track’s inaugural race in 2005, it has been parity heavy in the 250 Class with only a pair of riders winning more than once over the last 10 years. With no former winners in the field this weekend, Thunder Valley’s ninth different winner will stand atop the 250 Class podium.

Thunder Valley is always in the spotlight whenever the championship travels to the mile high altitude, creating a more challenging environment for both teams and riders as a result of the thinner air. Fitness becomes even more important, while getting the most out of the motorcycle can be what makes or breaks a shot at victory. As a result, Thunder Valley has a tendency to feature a variety of winners, with six different riders earning victories in the 450 Class over the last decade to go along with nine in the 250 Class.