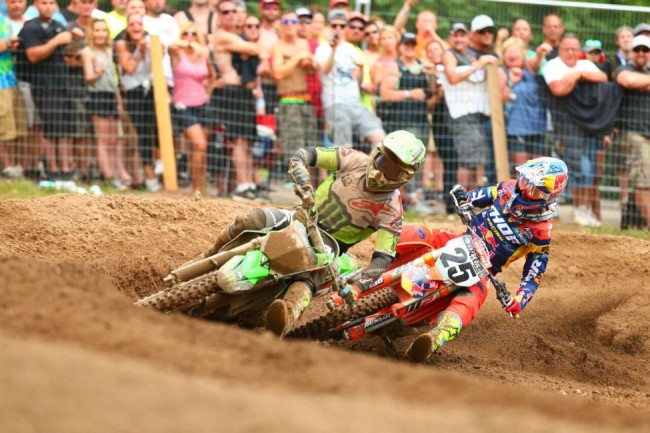 Moto one
Joey Savatgy took the win despite colliding with a backmarker and injuring his foot. Savtagy was battling with teammate Adam Cianciarulo early in the race but Adam crashed out of the lead in a slick section and would end up a frustrated fifth. Jeremy Martin kept the pressure on Savatgy finish second with Osborne putting on a late-crace charge to pass Cianciarulo and Plessinger in the last two laps for third.

A shortened (20m plus 2 laps) and delayed muddy second moto was won by Jeremy Martin on his Geico Honda with Loretta Lynn’s winner and AMA rookie Justin Cooper and Frenchman Dylan Ferrandis to complete a very diverse top three!

Martin won the overall from Savatgy and Osborne.

The first moto was sensationally red-flagged in the 450 after a deluge of rain and then some lightening! The organisers rightly put the red-flag out to give Marvin Musquin the win after a good battle with Blake Bagget. Cole Seely fresh from his MXoN call up took third – and said it was good practice for the Nations! It was a bad moto for Eli Tomac who made a bad struggled and struggled to make his way forward finishing tenth.

The track after the rain!

Marvin Musquin took the holeshot and ran away with the win from a very impressive Martin Davalos and equally impressive Cooper Webb who came through to third in his return from injury. Dean Wilson and Eli Tomac rounded out the top five.

Musquin won the overall from Seely and Davalos.