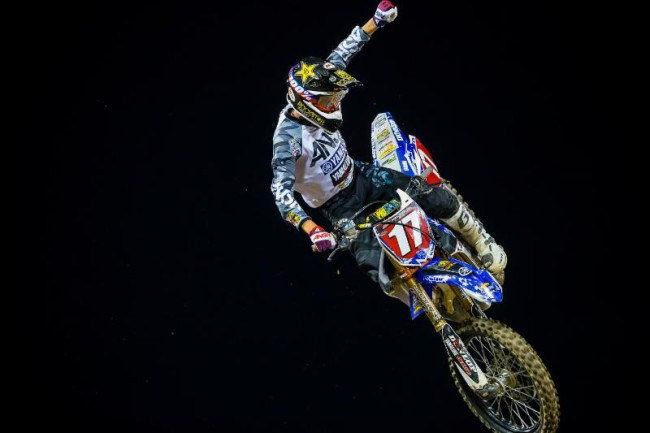 When Trey Canard over jumped into the corner early in the main to pass Ken Roczen, it was the Oklahoman’s biggest statement of the season.  He knew he needed to win to claw back championship points and he knew that he didn’t want to wait around and let Roczen get any confidence.

Right there, Canard said, ‘I am the man to beat tonight.’  Canard eventually made the pass stick two turns later and began to check out only for Roczen to get his flow and claw back the distance to Canard.

But this was where Canard was impressive yet again, he didn’t crack under the pressure. Before Canard would  be likely to make a slight mistake to allow Roczen through, but this time, on a technical track, Trey stayed calm, cool and collected. It was one of the most impressive wins of his career and vaults Canard into the title chase in his own mind and the eyes of his rivals. They know that if he can limit the mistakes he will be a title contender with his speed.

Roczen was happy to get a couple of points back on Dungey but he looked a bit more on the edge that he did in the first couple of rounds, Ken wants to get the points lead back as soon as possible but on this night he was over shadowed by Trey Canard.

Cooper Webb put the final nail in the coffin for the rest of his rivals and maybe made the biggest statement of the night. After giving them more than a glimmer of home after a pretty sickening over the bars crash in practice Webb did what he needed to do in the heat race to get into the main.

But there was no holding back in the main and, as he began to catch his nemisis Bowers, the Pro Circuit man went to pieces and couldn’t hold his own pace or never mind fight Webb for the lead after Cooper executed a text book block pass to take first position.

From there Webb controlled the race leaving the rest of the field wondering just what they have to do to beat this guy in race never mind the championship! And, with an 8 week break now in the East Coast series, Webb can heal up and even get a head start on outdoor testing on his East Coast rivals before coming back to supercross and going after his first supercross title.

The series now moves on to Arlington Texas where the 250 East Coast will start and the likes of Marvin Musquin, Justin Bogle and Jeremy Martin will be looking to make a statement of their own!